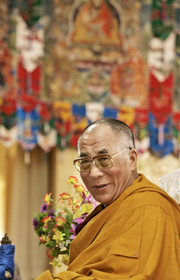 The spiritual leader had come to Beijing in 1954, the year he turned 19. With Chinese troops in Tibet, he studied communism and yearned to blend it with Buddhism.

Mao would have none of it. Two years later, he bombed a 16th-century Tibetan monastery, Lithang. The Dalai Lama was devastated, writes Alexander Norman in “Holder of the White Lotus: The Lives of the Dalai Lama,’’ published by Little, Brown, a conscientious account of Tibetan religious history since the 14th century.

“It became clear that Chinese Communism entailed attacking the very foundations of the Tibetan way of life,’’ writes Norman, who has known the Dalai Lama for 20 years.

As tensions spilled over into uprisings, the Dalai Lama would be forced to flee Lhasa in 1959, journeying on foot and horseback across the Himalayas and into exile in India.

Though White Lotus offers a sound introduction to Tibetan politics, its focus on the remote past may disappoint those seeking to understand the anti-Chinese rioting that erupted in Lhasa on March 10.

For a more detailed look at what motivates the current Dalai Lama, try Pico Iyer’s “The Open Road: The Global Journey of the Fourteenth Dalai Lama,’’ published by Knopf.

The Chinese government has accused the Dalai Lama of stirring the unrest, calling him a “wolf in monk’s clothing.’’ Yet he has repeatedly urged his people to refrain from violence. According to people Iyer interviews, Chinese leaders should thank the Dalai Lama for remaining a voice of reason amid provocation.

“They call him a separatist, a splittist,’’ Lobsang Yeshi, a former leader of the Tibetan Youth Congress is quoted as saying. “But if the Dalai Lama weren’t there, the Tibetan struggle would have taken a different turn.’’

Iyer, a veteran journalist and author is hardly a dispassionate commentator. His Bombay-born father, a philosopher, got to know the Dalai Lama after he arrived in India as an exile.

The book is based on conversations Iyer himself had with the Dalai Lama over three decades.

The Open Road gently describes the many sides of the Dalai Lama, including the playful. He “can rarely catch sight of a beard or a male ponytail without wanting to tug at it,’’ Iyer writes.

Yet the spiritual leader’s message is dead serious. At one point in the book, the Dalai Lama tells a group of American students that it’s difficult for him to talk about peace while his people are dying; it would be tantamount to manslaughter, Iyer quotes him as saying. He taunts those who pray for world peace but do little to attain it.

Little is left of the idealistic monk who tried to convert Mao. In his place is a “hyperrealist’’ who urges his people to seek an “independence within’’ rather than split with China, Iyer says. Though The Open Road could use a dollop of skepticism, this is an elegant and poignant account. Just don’t expect a happy ending. Bloomberg