Capturing the spirit of home

Capturing the spirit of home 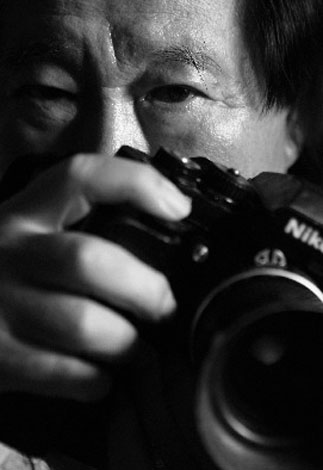 Edward Kim held his first photography show in 1957 when he was a sophomore in high school. His second show followed a year later. Since then, it has taken him 50 years to show a major retrospective of his works at home.
He’s had reservations about having a photo exhibit. As a photographer and editor of noted publications like National Geographic Magazine and Geo, Kim felt his works in print were enough to communicate with his audiences.

Kim’s photography career dates back to the 1950s. His father, a scholarly gentleman keen on exploring other civilizations, gave him a Rolleicord, an old twin lens German reflex camera. Father gave son a critical mission: to find out what a camera does over a summer vacation.

Kim played around with His “magic box” all that summer, taking pictures of his family and friends. Then one day, while he was roaming around his village, Kim saw a young mother breastfeeding. The young Kim felt compelled to capture the scene close-up.

His concept of photography changed from that day on, and he realized what his father had wanted him to learn.

“When he asked me at the end of my vacation what I found out, I told him that I had seen things I’d never seen before,” said Kim with an awkward smile. At 67, he is sharply dressed and looks younger than most men his age. “The camera opened up a new world. I think my father had known that.” 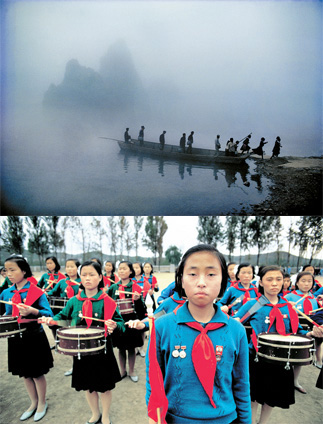 North Korean schoolchildren during a drum lesson; Children living on an island coming to school by ferry, Danyang, 1974

“Homeward Bound,” his current exhibition at Goeun Museum of Photography in Busan, encapsulates Kim’s photography career. It puts together his major works spanning decades from the early 1950s, including a series on North Korean society at the peak of the cold war.

But the photos also capture a deep sense of longing for home and rural landscapes, the powerful ties that bind Koreans to their homeland.

In his memoir “Homeward Bound,” Kim writes in detail about how he suffered while he was away from home.

Kim left Korea in 1960, shortly after witnessing a violent uprising led by student activists against the late Korean President Syngman Rhee. He writes about his days of living with Beatniks in New York and a failed suicide attempt, which made him push harder for success.

While talking, Kim stops in front of one picture in the underground gallery. It’s a photo he took in 1974 of rural village children playing on a boat in a ravine. A cow grazes under a nearby tree. It’s a landscape that typified rural Korea before the government undertook massive industrialization. The picture, Kim says, reminds him of his feelings about home. 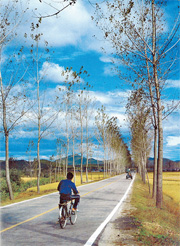 Ironically, his home is far from what he sees in this photo. Kim was born in Eulgiro, central Seoul, an area chock-a-block with banks and department stores.

Many works in this exhibition are images captured on the road. The show’s title, “Homeward Bound,” is the title of a black and white picture of women carrying baskets on their heads as they return home from work in Pyeongtaek on the outskirts of Seoul. Other photos capture scenes of students living on an island disembarking from a ferry on their way to school, and a man cycling through a wooded countryside.

“It’s strange how clearly I remember what I was feeling when I took each of those pictures,” Kim says, gazing at a photo a sleeping baby piggyback on an elderly man in a field. “This was taken at dawn. He was waiting for his fisherman son.”

A majority of the works in the show have been printed in the National Geographic magazine where Kim spent 18 years as a photographer and later as chief photo editor.

The collection includes a photo of a 12-year old Tahitian he met on Bora Bora Island, a cover shot in the magazine in 1974 for a feature on the history of migration in the Northern Pacific. 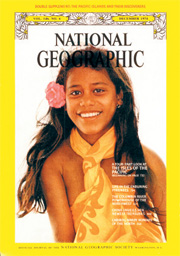 A 1974 cover for National Geographic about the history of migration in the North Pacific.

But the highlight of the show is his photography series on North Korea, where Kim traveled for 28 days in the early 1970s. Kim had pitched an idea for an exclusive photo shoot to the North Korean Embassy in Moscow. He asked the officials there to forward his letter to the late Kim Il Sung, the North Korean leader at the time.

The reply arrived. If he came alone, he was welcome, the message said.

The U.S. State Department left the decision up to the magazine. But on one condition: the state wouldn’t be responsible for any unexpected incident that might occur in the country. North Korea was one of the world’s most secretive nations then, as it still is.

Before his departure, Kim wrote out a will, but even then, he says he didn’t feel threatened. He was Korean, after all, even though he was visiting as an American citizen. In September 1973, Kim became the first Western journalist to cover North Korea. The story is still talked about as legendary in Western journalism.

His series on North Korea was shot mainly in the capital Pyongyang and includes close-up images of steel workers, women in colorful uniforms and flowers on city streets greeting the Bulgarian president on a state visit. Accompanying a picture of schoolchildren playing the accordion is a caption that says the students sang “We are the happiest children in the world.” 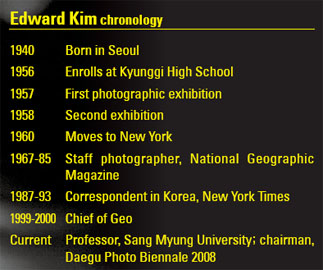 The images show an objective view of the country, yet still personal on many levels. One of the most notable works from the series is a picture of workers hanging from a crane, washing the gold-plated statue of Kim Il Sung in front of a Pyongyang museum.

The story won him the best coverage award by Washington’s Overseas Press Club that year. But on the other side of the world, he saw an entirely different reaction.

After the story ran, Kim received mail from a North Korean official saying they were disappointed at how biased the coverage was.

“If I met him on a personal level after he left his party, I think he wouldn’t criticize me,” Kim recalls. “After my visit to the North, it made me feel more strongly that the two countries should reunite.”

A few years after Kim was promoted to chief photo editor at the magazine, he returned to Korea for good. He teaches photography at a university here and is a naturalized Korean citizen.

“The idea of home reminds me of vibrant mothers who are strong but also subdued,” Kim says. “They possess modest dreams and endure pain, but they never give up.”

“Homeward Bound” runs through August 3 at Goeun Museum of Photography. To get to Goeun, get off Haeundae subway station and walk toward Haeundae Market. The museum is located across from Haeundae District Office. The museum is open Tuesday to Sunday from 10 a.m. to 7 p.m. For more information, call (051) 746-0055.