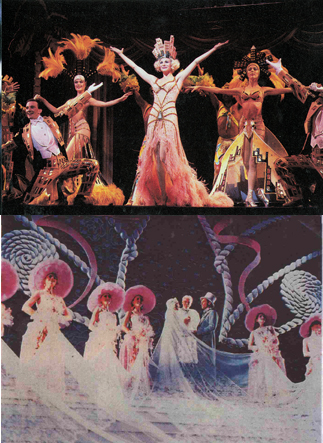 To Willa Kim, an established Korean-American costume designer for Broadway shows, her career was more a matter of romance than a means of making a living. And that was why she could go on breathing on stage for decades, even now, at the age of 91.

Also known as the “dragon lady” for her uncompromising nature, Kim is a two-time winner of Tony and Emmy Awards. In the upper lobby of the Gershwin Theater on Broadway, New York, Kim’s name shines alonside legends like Oscar Wilde, Eugene O’Neill and Katharine Hepburn on a plaque that honors inductees to the American Theater Hall of Fame.

Kim is the first and still the only Korean-American in this Hall of Fame.

The American Theater Critics Association each year selects a winner out of candidates who have worked on at least five memorable productions over at least a 25-year career.

The spectrum of her work knows no borders. She has hopped from ballets and musicals to operas and stage dramas. Her career spans more than half a century, and she’s worked on more than 150 shows.

“Well, I think it was about time,” she said followed by a hearty smile, when asked about her 2007 induction to the Hall of Fame, during her recent visit to Incheon, for the opening of the Korean Immigration History Museum last week.

Her voice is clear, high-pitched and strong, betraying her age. She’s dressed in a pale blue blouse with matching pants and accessories, With her elegance and poise, she remains true to her decades-long career and reputation as a celebrated costume designer.

“I still find myself telling strangers in clothing stores what to buy and what not to buy. It’s hopeless. Be it a butcher’s wife or an actress, I have to do it,” she said, laughing.

Not surprisingly, she has never retired. Last year, she designed costumes for the ballet “Sleeping Beauty,” followed by the opera “Turandot” the year before. This year, Kim is “enjoying the luxury of not being crazy busy all the time,” but she still makes sure she keeps herself occupied. She is now working on several ideas in her studio-home in Manhattan, where nine rooms are filled with books and design materials. 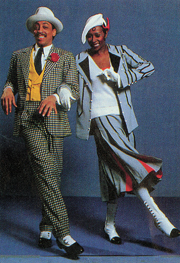 In Korea, she is yet better known as sister to the late Kim Young-oak, the first Asian to command a U.S. combat battalion. A World War II hero, Kim was given several high-level decorations from Italy, France, the United States and Korea. Willa Kim’s visit last week was to celebrate a memorial hall in the Korean immigration museum in honor of her brother.

The only Korean word that she could say during the two-hour interview was kimchi, but she says she cannot forget her Korean heritage. Her father was Kim Soon-kwon, an independence activist against Japanese colonial rule in Korea.

Based in Los Angeles, her father was a member of Dongjihoe, a group of activists led by Syngman Rhee who later became Korea’s first president after liberation from colonial rule in 1945. Willa, the eldest of six children, recalls she was always drawing when she was young.

“I don’t remember what I was sketching, but it’s clear that drawing was a deep-seated urge in me from my early childhood,” she said. She once asked her father to “publish her drawings in the L.A. Times,” she said, laughing. 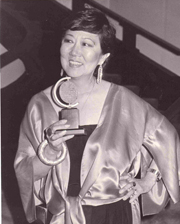 Willa Kim smiling with her Tony Award for her Broadway costumes. She won two Tony Awards for “Sophisticated Ladies” and “Will Rogers Follies.” Courtesy of Willa Kim

Under the influence of her father, Willa Kim found herself compelled to join anti-fascist street protests when she was at Los Angeles City College. She boycotted Japanese goods and rallied on streets with Hollywood actors against fascism.

“One day, I sent my brother [Kim Young-oak] to distribute leaflets in front of a movie theater because I was sick. The police arrested him and his picture was in the paper the following day, poor thing,” Kim said. She said her brother was “kind and gentle.”

Kim started to devote herself to art after she won a scholarship to Chouinard Art Institute, now known as the California Institute of the Arts, or CalArts. There she “felt at home” working at fashion illustrations. She later worked in a department store as an illustrator, until she found a job at Paramount Pictures on the recommendation of her professor.

There, luck found her. “One day, I was walking down a corridor and found these beautiful illustrations and just snuck into the room,” she recalled. They were drawn by celebrity designers like Barbara Karinska and Raoul Pene Du Bois. Even though she had no idea who Kim was, Karinska asked her to do some color samples, and soon after was hired as her assistant.

Kim later moved to New York, married a cousin of Pene Du Bois and bgean working with legends like the artist Salvador Dali. This is why she calls her costume design career as her fate, “that started as a by-product of her dream to be a painter.” 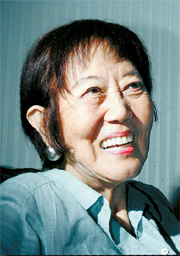 In New York, however, she was still torn between a lingering passion to be a painter and a blossoming career as a designer. “So I found an astrologer,” she said, with more loud laughter, “And he said, ‘Don’t do anything now. Things could happen very soon for you.’” About 10 days later, a playwright friend called and said, “Willa, we need a costume designer for our new off-Broadway show. Want to join?”

Without hesitating, Kim replied, “Sure.” So she made her debut as a costume designer in “Red Eye of Love” in 1961. “We could make more money scrubbing floors, and I had to make costumes by cutting up curtains. But it was fun,” she recalled.

After the show, Kim’s phone started to ring constantly, as producers and choreographers wanted to work with her. As her career grew, and she moved into ballet and dance as well, after a 1966 debut on Broadway proper.

What are the secrets behind her success?

She’s a perfectionist who sticks to her guns while being prepared to experiment. Before starting to sketch costume ideas, she tries to gain a deep understanding the characters and plot. She takes time to talk with the director and writer and does her research thoroughly, reading books and going to museums.

Willa Kim’s sketches for her works like “Legs Diamond” and others. Courtesy of Willa Kim

Then, she goes on to watch the actors to better understand their physical traits. “I want the actors to look their best and feel comfortable. Costumes should complement the movements of the actors,” she said.

This is why she invented the idea of using stretch fabric, such as lacquer spandex, instead of thick nylon that she thought “obscured the movements.” Kim is also credited with using paint on her costumes. “I wanted to use my dream and passion for being a painter in my designs,” she recalled.

But there was a problem. Paint stiffened her fabric. So Kim roamed around town and found a factory in Brooklyn that had the perfect dyes she needed. The factory owner refused to sell the dyes, but Kim did not give up. Instead, she found out that the factory owner’s daughter was studying dance and cajoled him to make a deal by offering a scholarship to his daughter. “Well, I had to have that paint,” Kim exclaimed, smiling.

Her new approach made pathways for costume designs. Capezio, a dancewear company, asked her what kind of fabric she used, and later popularized the fabric in their products. Painting on costume, she said, is now a common practice.

Her perfectionist style sometimes resulted in her assistants being forced to run to Chinatown to get authentic turtle shells for costumes once. She even got into fight with producers. When the producers of the 1991 musical “Sophisticated Ladies” criticized her costumes and changed them, Kim stood up and said, “I have a first-class ticket to Italy. I’m leaving.”

The show flopped, though, and she got a call from the new artistic director Michael Smuin who insisted on bringing Kim back. She would later win a Tony for that show.

“Being formulaic is boring,” Kim said. “Everybody wants to do things the old way because it’s faster and it costs less. But it’s tedious. Using your imagination to come up with new ideas is how an artist fights convention,” she said.

This is why she wants to be remembered as an inspiration to others, yet she has a lot more things to do before her role in history is cemented. “As long as I can still remember things, paint and draw, it seems silly to decide I’m not going to do it,” she said. “I should do more.”

And with that, she flew back to her Manhattan studio-home.