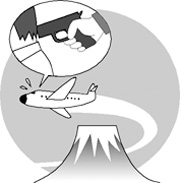 An hour later, the Yodoho began its approach. A sign reading “Pyongyang” was hanging at the airport and a woman in a North Korean army uniform was holding a banner that read, “Welcome to Pyongyang.”

It wasn’t Pyongyang, though; it was Gimpo Airport in Seoul. The U.S. Army and the Japanese and South Korean governments tried to fool the hijackers, through messages between the air-traffic controller and the pilot. However, the trick didn’t last long. A Northwest Airlines plane on the runway was spotted by the hijackers, alerting them to the fact that this was not Pyongyang.

Because of the hostages, shooting the plane down was not an option. It was the courage of Shinjiro Yamamura, Japan’s transportation vice minister, that resolved the situation. The hijackers accepted his offer to release the passengers with Yamamura himself becoming a hostage.

Eventually the Yodoho landed at Pyongyang Airport four days after it was hijacked and the nine hijackers were exiled in North Korea as they wished.

Most of the criminals were in their early 20s and members of the terrorist Japanese Red Army faction, established by student activists. The reason for the hijacking was they planned to use North Korea as a base for a “simultaneous world revolution.” They had no doubt that North Korea was a true “laborers’ country” that dreamed of starting a world revolution on its own shores. Recalling the history of the past 38 years, we cannot erase the feeling that it was a somewhat a naive idea.

North Korea used them for some time to promote itself and as a political maneuvering card. As time passed, three died and two were arrested in Japan and Southeast Asia, with only four remaining.

North Korea recently revealed during negotiations with Japan that they can send them back to Japan. Although the North emphasizes the humanitarian aspect, it cares only about removing its name from the U.S. list of terrorist countries. Could the saying of swallowing the sweet and spitting out the bitter be used at this moment? Pity for those who become pawns of negotiation between the North and the U.S. after 40 years.