Are there alternatives to public education?

Are there alternatives to public education? 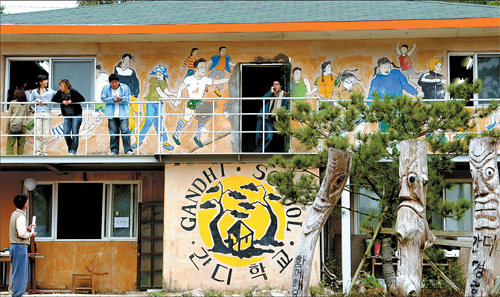 Song Jae-kyung, a mother of three primary school kids, made a daring decision three years ago. Unhappy with the limitations of the public school education system in Korea, she took her children out of their local school and enrolled them at Peace Flower School, an experimental institution in Hanam, Gyeonggi.

When it comes to education, Song knows what she is talking about. As a teacher at Myeondong Elementary School in Myeonmok-dong, northern Seoul, she is perhaps more aware than most about the inherent problems children face in the public education system here.

“Public schools are knowledge-oriented,” she said, with a bitter smile. “But there is so much more to education than just rote learning and studying textbooks.”

The system at the Peace Flower School is more child-centered, Song said. “The culture of traditional schools is institutionalized and systematized. Alternative schools make students happier.” 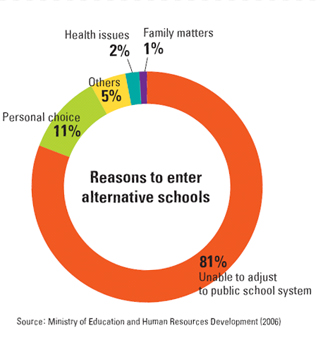 Whether Song is right in her claims, the issue of students’ happiness needs addressing. In a recent survey conducted by the Korea Institute of Curriculum and Evaluation, Korean elementary students scored lowest among four countries in terms of their level of interest in school classes.

Song said her second child, Min-seo, had been unhappy at her elementary school, even though she had been really excited about starting school.

“Min-seo felt the classes were repetitive,” Song said. Above all, as a first grader, she just didn’t find classes fun. 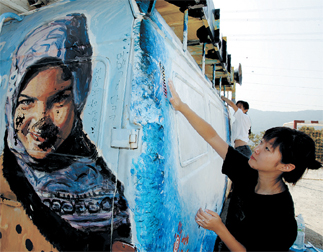 A student at Gandhi School reads in the school’s backyard. [JoongAng Ilbo]

“Before, he was very introverted,” she witnessed. “But now he initiates discussions and is open-minded about relationships.”

Placing your child in an alternative school carries risks, though. In a country as conservative as Korea, paper qualifications are highly regarded, and Song can’t be sure how universities will view her children’s education if they apply for tertiary education here.

“But I think I have had courage in my convictions and the actions I took,” Song said. In fact, Song moved her family from Seoul to the Gyeonggi area to be closer to the school.

More parents are following Song’s path, it seems. Currently, there are some 200 alternative schools in Korea, although the Ministry of Education has authorized only 29 of them: 21 high schools and eight middle schools. 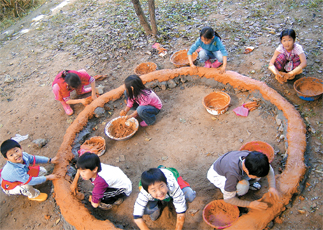 Alternative education in Korea dates back to 1997 when the Ministry of Education authorized Gandhi School in Sancheong County, South Gyeongsang. It was originally set up as a school for children with behavioral issues. Yang Hee-gyu, the school’s head, said he didn’t want his students to be subjected to exam pressure.

Yang benchmarked Summerhill School, a progressive boarding school on the east coast of England founded by Alexander Neill. This school focuses more on student’s emotional well-being than the traditional educational concept of transferring knowledge from teacher to students, according to the “Alternative School White Paper,” published last year by the Ministry of Education and Human Resources Development.

This same philosophy underlies teaching at alternative schools in Korea. At the Flower Peace School, founded in 2003, there are no textbooks, just storybooks. A typical day includes a two-kilometer walk through a nearby wood, poetry writing, song composition and discussions based on texts they read. “We aim to assure students to learn in harmony and develop emotional relationships,” said Choi Jung-eun, a teacher at Flower Peace School. “What students can learn is unlimited.”

Gandhi School in Sancheong focuses on self-directed learning. “Learning should help students live happier lives,” Yang said. “A happy person should be satisfied with at least four things ? health, love, freedom and wisdom.” There are also courses on feminism, human rights and psychology. No course is mandatory and they take four per semester. 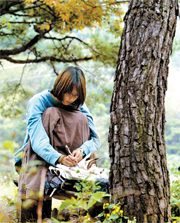 A student at Gandhi School reads in the school’s backyard. [JoongAng Ilbo]

Even though alternative schools are not going to replace the current public education system anytime soon, new models for teaching and learning are gaining in popularity, according to Kim Shin-ok, a school commissioner at Seoul Metropolitan Office of Education.

“Increasing numbers of parents are knocking on the doors. Ultimately, they want their children to grow up in a more humane and happy environment,” Kim said.

Warren Chung, a lecturer in Educational Technology at Ewha Womans University and a former teacher at Ewha Middle School, said one of the most demotivating aspects of public education is the emphasis on rote learning, a style of teaching that is not used in alternative schools.

“Students are not being challenged to reflect upon the world around them or to apply what they learn in school to their own lives,” he said.

Experimental schools, on the other hand, “emphasize peer and hands-on learning through apprenticeship. They play a crucial role in nurturing talent that would otherwise be ignored as well as integrating those marginalized by mainstream education,” Chung said.

Thierry Tillement, the principal of the French School in Seorae Village, southern Seoul, agrees. Although the school isn’t an alternative school in the same way as the Peace Flower School, the French School tries to embrace a similar philosophy.

“We focus on individualizing students,” he said. “We should cater to the needs of every single student.”

“The need for alternative schools stems from changes in society when we moved from an industrial to an information-based society in the 1990s,” Chun said, who feels that schools in Korea have not changed at the same pace as other facets of society.

As of last year, only 5,000 students were enrolled in alternative schools, or 0.2 percent of the total student population, according to the Alternative School White Paper.

“The low rate shows that despite the social changes, our education system remains conservative and traditional,” Chun said.

Some alternative schools have even veered away from their original mission. For example, Bundang International School in Bundang, Gyeonggi, founded in 2006, specializes in preparing students for a university education overseas and adheres to a Western curriculum. Most students at this school have spent time living abroad and classes have an average of eight students.

“The original purpose of alternative schools, however, is not for elite education and entrance exams,” Song said.

Gaining admission to an alternative school is complex. To enter Flower Peace School, both parents and students need to submit an application form and self-introductory papers. The student must undergo an interview.

This aspect concerns Chun. “Education should never be a market,” she said. “It shouldn’t be for any private interest.”