Celebs get their hands dirty down on the farm

Celebs get their hands dirty down on the farm 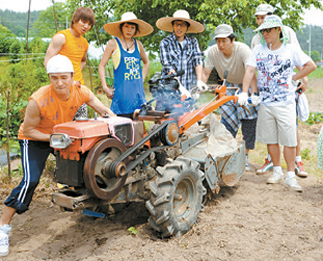 A scene from “Here Comes the Family” featuring celebrities in a farming village. [SBS-TV]

I watched as a sought-after singer wearing no makeup at all caught live fish with her bare hands.

Meanwhile, a prim-and-proper actress got ready to slice up the catch for dinner.

This is the latest fad on Korea’s weekend TV shows ? putting celebrities through pain to entertain viewers.

The singer Lee Hyori and the actress Park Ye-jin were featured on a recently launched entertainment show called “Here Comes the Family.”

The singer and actress were part of a group of eight celebrities.

They are sent on a trip to the countryside where they stay on a farm whose occupants have been sent on a fancy holiday.

The celebrities stay on the farm and take care of the farming while the family is away.

The eight celebrities are dubbed a family, although they have no blood ties.

The show’s point is that this “family” from the city is thrown into the reality of farming.

On their first trip to a village in Gangwon Province, the rookie farmers have to catch catfish from a valley stream, take care of hyperactive baby pigs and till the soil.

As viewers we see footage of these singers and TV stars mingling with wildlife, trying their hand at fishing and cutting up raw fish for dinner.

From time to time, in what appeared as an attempt to make the audience laugh, the celebrities played games, one of which had women giving men piggyback rides across a pond, and vice versa.

These games, which can be described as nothing but silly, seemed to have nothing to do with helping out the farming family.

But it was obvious that the celebrities were keen to challenge their pretty images.

I have to confess that I still found a twisted kind of fun in watching the celebrities suffer while I sat slumped like a slob at home.

Actually, the show’s theme is an already widely well-received format of the KBS-TV show called “Two Days and One Night.”

In that program, six celebrities visit every corner of the country to experience extreme wildlife situations and complete nonsensical missions.

This KBS show is such a success it triggered a spin-off on rival TV network SBS.

Led by the sports star-turned-celebrity M.C. Gang Ho-dong, this “Two Days” show, one of the most popular entertainment shows on TV these days, is clearer in its theme about bullying the celebrities.

As they tour the countryside for 48 hours, the participants cannot eat or sleep unless they complete a task or fulfill a mission.

One of these “challenges” was eating rice rolled with fish sauce or extra spicy hot sauce.

Others included bungee jumping and traveling without anything to eat for hours.

One of the good points about the show is you learn about the places the teams visit.

During the tours around the countryside, the celebs have to solve quizzes about the area, which may or may not inspire the viewers to take some time off and go visit these far-flung regions.

But you do find out something new about Korea each week.

Still, the real fun of the show lies in the chemistry between the celebrities.

Each member of a team has his own personality and everyone mingles well with each other. From pretty-boy singer Lee Seung-gi to the rascal-like singer Eun Ji-won to others with different characters, they all share some joy and pain as they try to survive each week’s episode.

By enduring the challenges on the show, each celebrity wins the approval of the viewers, for sure, and at least it makes you feel good to be a non-celebrity on Sunday evenings.

Mind you, I’m still not sure how the family of farmers will react when they find their guests have been piggybacking through their pond.