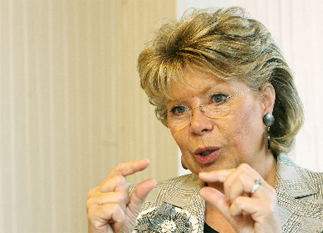 Deregulation and more competition are words that have become mantras for regulators of the European Union’s telecommunication and broadcasting industries, according to Viviane Reding, the European Commissioner for the Information Society and Media. Reding visited Seoul last week to attend the Organization of Economic Cooperation and Development’s Ministerial Meeting on the Future of the Internet Economy. The European Union, she indicated, is seeking to promote more competition in the telecommunication industry in particular.

Reding, a former newspaper reporter in Belgium who later became a Luxembourg politician in 1979, was interviewed by the JoongAng Daily and the JoongAng Ilbo last Tuesday. She acknowledged that she and other European Union regulators are scrambling to regulate the continent’s vast telecommunication, broadcasting and other media industries, which have been showing explosive growth over the past years.

Q. In Korea, there have been intense debates on how to set the level of regulation on local broadcasting and telecommunication industries since these two media fields are increasingly converging. Can you tell us about how regulation has been changing in Europe in line with media convergence?

A. At the European level, we decided in 2004 to put the responsibility for media regulation and telecom regulation in the same hand because we were very much aware that convergence was on the move and we could not give scattered, contradictory responses to the common endeavor of the industries to move together. Of course, in this kind of regulation you have to think about sometimes opposing interests ? the interests of traditional media to conduct business and to have revenue but also the necessity for any society to have freedom of expression and freedom of speech.

But also, the society needs to protect general interests like the protection of children, the fight against hate speech and of course, the protection of consumers. To bring these three elements together in balance is not an easy task, but I think we have managed to do it well.

We do have a lot of competition in traditional media industries like the print media or the broadcasting media. So the only thing we need to do is to keep the diversity of these media products. We still do have some problems in the telecom business, where the danger is that the industry incumbents and the old monopoly ? which are not monopolies anymore today, but nevertheless out of historical developments they do have great strength ? these incumbents have to open the market, because if you have a closed market and if you don’t have competition, you don’t have investment and you don’t have consumer benefits.

Competition leads to innovation, leads to investment and leads to consumer benefits. That is the reason why we have telecom regulations; these are regulations to open markets to competition.

The efficiency of broadcast frequencies has been increasing as the current broadcasting system is increasingly switching from analog to digital. Does the EU tend to acknowledge the vested rights of existing companies when distributing extra frequencies, or does it prefer to increase the number of new players in order to promote more competition?

We will have a once-in-a-lifetime chance of switching from analog-based TV to digital-based TV. Because of compression of the signals, we will need fewer frequencies for doing more. Now the big question is who gets this more. There are of course conflicting interests between the broadcasters and telecoms. So what I have proposed in Europe is to have equal footing for both industries because the broadcasting industry will need to offer more services, high-definition, which is automatically in high demand for frequencies. But we also need to cover the whole territory with broadband for all, not to mention that there are also mobile service providers. Europe is a mobile continent, where our mobile penetration rate is on average 112 percent, so we are certainly going to go for all the new developments of the mobile Internet industries.

Also, we believe that once we have solved general interest questions, then you should leave the spectrum users to decide what services they offer and what technologies they use. Again, we believe that once the companies have bought the spectrum then we should just leave them to do whatever they want to do with the new spectrums, which we believe will lead to better usage of this very scarce resource. Beyond this public interest market, you have to open the market to more efficient use of this scarce resource.

All our member states do have their own rules on media ownership. They very often base these on historical developments and that is one of the reasons we did not want to make harmonized EU rules, because you have to take into consideration historical developments of the media within each territory. This kind of cross-ownership and media concentration laws exist in the interest of media pluralism.

I cannot discuss this specific rule because they are different according to societal developments in each country, but they have to have one simple goal ? to have pluralism in the media landscape, because pluralism is the basis for the proper functioning of democratic society.