Recollections of an old soldier

Recollections of an old soldier 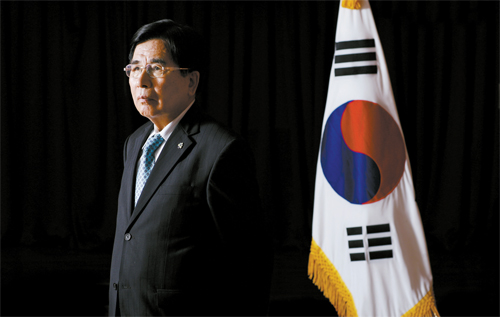 Kim Ki-jae, 79, chairman of the 800-member Seocho branch of the Korean War Veteran Association, stands next to the Korean national flag. By Kim Hyeon-dong


It was supposed to be just another lazy Sunday. But the morning’s peace was ripped apart by the blast of sirens. Many South Koreans rushed to their radios to find out what was happening. An ominous message was read out: All South Korean soldiers must report to their units; all leave was canceled.

The date was June 25, 1950, and people like Kim Ki-jae, 79, were shocked by the ferocity of the attack that North Korea unleashed on the South.

“Almost half the South Korean soldiers were on leave at that time,” Kim recalled. “Many of those young men died when North Koreans ambushed them on their way back to their bases. It was a massacre.”

Today marks the 58th anniversary of the outbreak of the Korean War (1950-1953). To men like Kim, a second lieutenant in artillery, who are mostly in their 70s and 80s now, June 25 is emblazoned on their hearts. 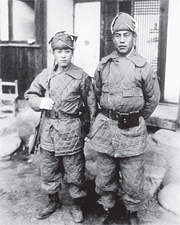 North Korea launched its first attacks at approximately 4 a.m. on the 25th, firing mortars and artillery at South Korean defenses along the 38th parallel, a border agreed upon by the United States and the Soviet Union in 1945 during the closing weeks of World War II.

The South Korean military had not anticipated these attacks. In fact, sensing a relaxation in tensions with the North, it had lifted its emergency alert status and allowed nearly a third of its soldiers to go on leave.

Under these circumstances, the North Korean military captured Seoul in three days. South Korean forces were outnumbered and outmaneuvered by a better armed opponent.

“The North Koreans had fighter jets and tanks,” said Kim. “Our weapons were better suited for security, not for war.” 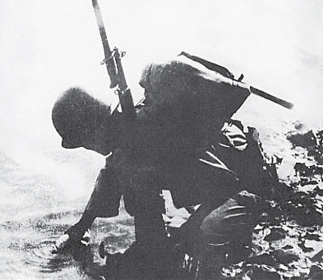 A South Korean soldier collects water from Apnok River, or the Yalu River, on Oct. 26, 1950 in an iconic photograph from the Korean conflict.

He said the most fearsome weapon the enemy had were tanks. “We didn’t have any weapon that could fight against the tanks,” Kim said.

“There was an anti-tank warhead called ‘HEAT’,” Kim went on. “We didn’t have any of those; we were just defenseless.”

Kim saw his fair share of death and destruction during his the conflict. “While we were retreating to Daejeon, a fellow soldier was hit by automatic weapon fire from a jet fighter,” Kim recalled. “He died instantly.” 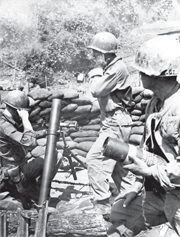 Artillerymen fire mortars near Cheolwon, Gyeonggi, on the morning of July 27, 1953, moments before the ceasefire agreement.

On another occasion he came across a mound of corpses. “Near a stream in upper Seoul, there was a long line of willow trees and underneath it were North Korean communists lying dead,” Kim said.

In general, the battles were chaotic, Kim went on. “Once in Sacheon, South Gyeongsang, we were attacked by a large number of Chinese communists,” Kim said. The Chinese troops got so close to South Korean lines that Kim and his fellow soldiers found themselves firing directly into a mass of humanity.

One of the most chilling moments, Kim recalled, took place in the opening days of the war. “My platoon moved out late at night in Gwacheon. The next morning we woke up just 20 to 30 meters from enemy positions,” Kim said.

When the war finally ended in 1953, Kim said he felt desolate. He had seen so many young men die and now the fighting was over, there was a great gulf to fill. 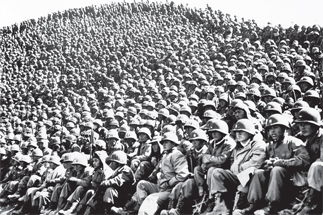 South Korean soldiers rest after a battle on an unknown hill. Before the Allies intervened, South Korean troops were outgunned and outnumbered. [JoongAng Ilbo]

“When we heard that the war had ended, a group of us were bathing together with some Chinese soldiers whom we had been fighting a few days before.”

Cheong Seong-chang, director of Inter-Korean Relations Studies Program at the Sejong Institute, said South Korea’s attitude to the North has changed in the years since the historic summit between former President Kim Dae-jung and North Korean leader Kim Jong-il.

“In the 1960s and 1970s, South Koreans had an unsympathetic view of the North because the Korean War had directly or indirectly affected their lives,” Cheong said.

The director added that in the 1970s, feelings hardened further under the late President Park Chung Hee’s administration.

“During the 1960s, North Korea was economically better off than the South, so people here were more concerned about the economy,” Cheong said.

The director said the South Korean public started to feel a sense of superiority in the 1970s as the country’s economy grew. After the democratic movement in Gwangju in 1980, the public softened its attitude to the North and in the 1990s, as North Korea was no longer economically competitive, the public, especially the younger generation, became more open to North Korea, Cheong added.

It was at the beginning of this century that South Korea changed its views on North Korea. “Kim Dae-jung’s administration helped to lessen the memories of the Korean War and reconciliation started to take root,” Cheong added.

However, while young people say they want peace with the North, they are reluctant about embracing the reality of possible unification, Cheong said.

But, ironically, the older generation in the South, which is possibly the most hostile to the North, welcomes unification.

“Young people today tend to be practical and they consider unification unnecessary,” Cheong said. “North Koreans that I have talked to have changed as well, compared to the older generation as they are flexible in the way they think,” Cheong added.

“It has been nearly 60 years since the Korean War took place and people born in the mid- and late-1980s don’t feel that the Korean War really concerns them.”

According to a recent survey by the Ministry of Public Administration and Security, more than half of teenagers today don’t even know when the Korean War took place. Out of a pool of 1,016 middle school and high school students here, 57 percent said they didn’t even know the Korean War broke out in 1950. Only 49 percent knew the war started when the North launched its surprise attack.

Chon Hyun-joon, a senior researcher at the Korea Institute for National Unification, said relations between the two Koreas are currently at a standstill. “The demands made on each end are conflicted,” Chon said.

However, the general feeling in South Korea is that the public wants the new administration to be different from the last two administrations.

“The public is worried that North Korea might leave out South Korea and consider South Korea only as an economic supporter while improving relations with Japan and the United States,” Chon said.

The researcher said North Korea seems to have changed. “Obviously, we haven’t surveyed the North Korean public, but North Korean defectors say the North has modified its view on the South,” he said.

Kim’s fellow soldiers are now old men with gray hair. “In battle I lost half my friends; today the other half is growing old and dying.”

Kim is the acting chairman of the Seocho branch of the Korean War Veteran’s Association. Although the war changed his life, Kim and many of his fellow veterans are immensely proud of what they for their country.

“I believe the two Koreas should unite, but under one condition: free democracy, which is the cause we fought for.”