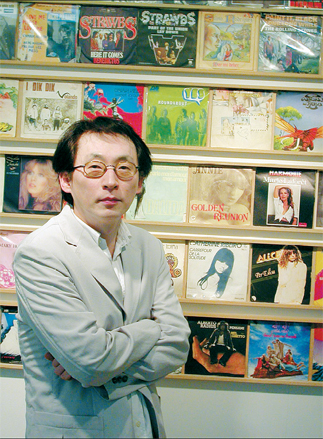 Seong Si-wan has been collecting albums for four decades. Provided by the organizer

Seong Si-wan, a record collector and D.J., has a short memory. He says he hardly remembers names of new friends.

But there’s one thing he never forgets the names of the songs his friends like. It’s been like that ever since he started collecting albums 40 years ago.

Seong, 47, introduced progressive rock to Korea in the 1980s. Prog rock fuses rock, classical and jazz music and was popular in England during the 1970s.

As the host of an MBC radio show, Seong spun tracks by bands like Pink Floyd, Genesis, New Trolls, PFM and Wallenstein. The sounds were new to Korea.

“I love progressive and art rock [a subgenre of rock with more complex harmonies and instruments] because they are rare in number and mostly come with creative covers,” he said, pointing to Nattura’s “Magic Key” (1972) record, one of his rare albums displayed at Daelim Contemporary Art Museum in Jongno, central Seoul.

Up to 2,000 progressive and art rock records, videos and cover art pieces from the D.J.’s collection are on display there at the “Records at an Exhibition” show.

The exhibition is divided into four parts: Rarities, which displays records that are now hard to find; Gimmick, a series of artistic covers; Cutesy Singles; and Fantasia, albums with unique cover designs.

Seong started collecting records in second grade and penpals from abroad sent him items. Also, he had two sisters in college who liked this kind of music.

“It’s not just about collecting,” Seong said, noting that his hobby reflects a desire for freedom, which society lacked back when he was in school. “Whether the album is one dollar or a million dollars, it means the same to me,” he said.

The exhibition runs through July 31. To reach the museum in Togui-dong, take Gyeongbokgung Station, line No. 3, exit 4.