Hotel suites that suit the super-rich

Hotel suites that suit the super-rich 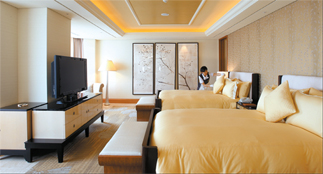 The royal suite room on the 31st floor at the Lotte Hotel in downtown Seoul. By Choi Jeong-dong

Kim Woo-choong, former chairman of the now defunct Korean conglomerate Daewoo Group, has lost his right to stay in the 903-square-meter (9,720 square-foot) penthouse suite on the 23rd floor of the Millennium Seoul Hilton Hotel. The Seoul Central District Court ruled that Kim’s lease was invalid. He was charged only 328 won ($0.31) per day, instead of the market rate of 10 million won per night. 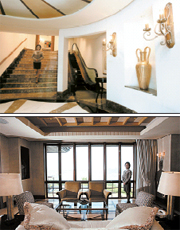 The inside of the Aston House of the Sheraton Walkerhill Hotel. By Choi Jeong-dong

Penthouse suites are the flagship rooms of five-star hotels, used by presidents, royalty and celebrities. The suites are more like apartments, with a master bedroom, bathrooms, dining room, library, meeting room, dressing rooms and extra bedrooms for staff. The most expensive penthouse in South Korea belongs to the Sheraton Walkerhill Hotel in Gwangjang-dong. Its Aston House costs 18 million won per night, including tax and service charges. Penthouses are usually located inside the hotels, but the Aston House is a two-story, 1,419-square-meter house on Mount Acha. Former President Kim Dae-jung frequently stayed here when he wanted to get away from the Blue House.

Aston House is often used for as celebrity weddings and international conferences. “But despite its beautiful surroundings, state leaders and participants at conferences usually choose to sleep elsewhere,” said Park Kwang-cheol, an official at Walkerhill. The duplex is relatively far from the Blue House, making it an inconvenient place to stay for heads of state.

U.S. pop singer Beyonce has stayed at the “Extreme Wow” room of the W Hotel. By Choi Jeong-dong

Instead, foreign dignitaries prefer the downtown Shilla Hotel and Grand Hyatt Hotel. The Shilla Hotel has two presidential suites on the 22nd floor, called the North and the South Wing. The 387-square-meter North Wing features a European style apartment with chandeliers and costs 10 million won a night. In contrast, the South Wing resembles a modern apartment.

The 330-square-meter Presidential Suite at the Grand Hyatt Hotel is located on the 20th floor and looks out toward the Han River.

While presidents and prime ministers have mostly used the Shilla Hotel suite, the Hyatt Hotel has a history of hosting royalty. Queen Elizabeth II of England stayed here. Mun Seung-hyeon, who is in charge of state protocol at the Foreign Ministry, said certain countries seem to prefer certain hotels. “The United States prefers the Hyatt, China the Shilla Hotel and Japan the Lotte Hotel,” he said. 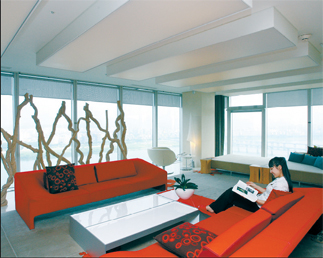 U.S. pop singer Beyonce has stayed at the “Extreme Wow” room of the W Hotel. By Choi Jeong-dong

Lotte Hotel is the closest five-star hotel to the Blue House. Located downtown, it is more exposed to city noise. Still, five heads of state have stayed there since January. During the same period, three heads of state stayed at the Shilla Hotel and two at the Hyatt Hotel.

Lotte Hotel has three royal suites, including the second most expensive room, a 449-square-meter suite on the 31st floor that costs 14 million won per night.

Foreign business leaders seem to prefer the Westin Chosun Hotel’s presidential suite. Priced at 7.26 million won per night, it features a simple, modern interior spread over 313 square meters. This was the country’s first modern hotel, built in 1914 during Japan’s colonial rule over Korea (1910-1945).

The W Hotel is well known for its emphasis on modernity and fashion. The hotel’s 273-square-meter flagship penthouse is called the Extreme Wow Suite. It has large glass windows, offering guests panoramic views of the Han River from a red sofa. The American R&B artist Beyonce stayed in the suite when she visited Seoul last November.

In southern Seoul, the Grand InterContinental Hotel and JW Marriott Hotel have luxury penthouse suites as well. The InterContinental’s 281-square-meter royal suite is priced at the relatively low rate of 3.9 million won. The American singer Mariah Carey has stayed there before.

The presidential suite at the JW Marriot Hotel is priced at 5.4 million won per night, and counts pop singer Ricky Martin among past guests.