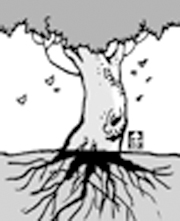 This is how Chinese words are composed. If we join these two characters bon and mal together, the meaning of bonmal becomes roots-branches.

There are two meanings of the word bonmal. When we say bonmal about an event, it refers to its cause.

However, it is often used in its literal meaning roots-branches especially in history writing.

The roots are the basis of anything. So when roots come together with the branches, the overall picture of an object is revealed.

Thus, roots-stems, which is pronounced geun-gan, can refer to an unshakable principle, or the core element of something.

The verse, “A deep-rooted tree can stand against strong winds,” found in a Sejong-era epic titled “A Dragon Flies up to Heaven,” also resonates with the idea of bonmal.

When we talk of an end part of something we call it maldan. Here again, we see the mal character. Maldan implies something marginal, short-term or temporary.

The word bonmal is often used to contrast the big and the small; important things at the core and the minor details on the periphery.

That’s why it has been so important to accurately distinguish the word in Asian political history.

We call a computer terminal a danmal-gi. Both the Chinese characters dan and mal mean the end of something. A computer is found at the end of the server, from which we can extract and send out data.

In the Internet world, worrisome things are happening at the users’ end. Fabrication of information is spreading and emotional and defamatory comments are running rampant throughout cyberspace.

The Internet in Korean society has become a way to attack public figures, authority or anyone who has a different opinion.

I’d like to suggest that we change the name of a computer terminal from danmal-gi to maldan-gi from now on.

The domain of maldan is one in which emotion prevails over reason. Instead of controlled viewpoints, biased feelings overwhelm. Instead of calm, well thought out arguments, aggression comes first.

It is appalling that the Internet world in Korea might be causing us to become a society of highly violent emotions, a society where bonmal roots and branches is reversed.


*The writer is deputy international news editor of the JoongAng Ilbo