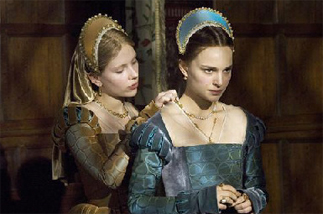 Sibling rivalry takes on a new twist between sisters Mary (Scarlet Johansson, left) and Anne (Natalie Portman) in “The Other Boleyn Girl.”

“The Other Boleyn Girl” features defining moments of British history with a secretive, or perhaps fictional, melodrama: the love triangle among two Boleyn sisters and King Henry VII.

Based on the British novel by Philippa Gregory, the film presents an engaging and sensual tale full of love and betrayal.

The main plot begins when the ambitious father of the Boleyn family decides to offer the eldest daughter Anne (Natalie Portman) as a mistress to King Henry (Eric Bana). However, it is Mary (Scarlett Johansson), the younger sister, who wins the king’s heart first with her docile and innocent personality.

Leaving the simple life in their countryside home, the Boleyn sisters have to enter the royal court and face the luxurious life of royals.

But while Mary stays as sincere and sweet as she’s always been, Anne becomes more ambitious about obtaining power and fame for herself.

When Mary is pregnant and therefore unable to please the king in bed, Anne makes her move for Henry. As she plays hard to get, she sets her ambitious sights on the ultimate goal ? becoming the queen of England.

There are moments that I thought it could have been worked out better.

With superb performances by the famous actors and a sound plot based on the best-selling novel, the film depicts this fascinating period of history well.

The Other Boleyn Girl, however, fails to fulfill the expectations of fans of the original work as it moves too quickly from here to there without providing lingering moments that audiences can ponder.

Anne’s ambition becomes reality when Henry divorces the former queen and marries her. At this point, I was amazed at how far a man would go to sleep with a girl that had been playing hard to get.

Well, I was not aware of the younger Boleyn girl till now, nor the possible cause of England’s separation from the Catholic Church, which came as a bit of a shock to me.

The Other Boleyn Girl is just as intriguing as it should be ? the world has already fallen in love with its story.

But sadly, there is nothing special about the film that differentiates it from the original text.

The Other Boleyn Girl