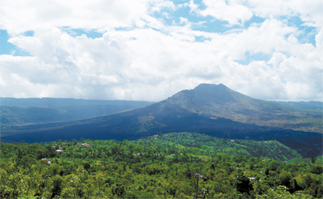 The Batur volcano on the northern part of the island is one of the most active volcanoes in Indonesia. By Brian Breuhaus

If I can give one piece of advice about visiting Bali it’s this: Visit the Monkey Forest in Ubud, just don’t bring small children.

My wife and I took our two children, ages 3 and 1, there expecting a family outing. Maybe we’d see a monkey or two as we pushed our stroller past the Hindu temples and thick, green trees. Perhaps we’d even give one of them a banana.

When I bought the tickets to the park, I asked the seller if we were guaranteed to see a monkey. He just laughed.

We got about 100 meters inside, and monkeys were everywhere and doing everything: nursing babies, fighting, screaming at each other and having sex. 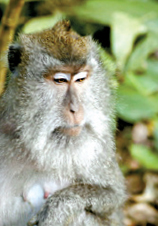 A closeup of one of the monkeys at the Ubud Monkey Forest in Bali, Indonesia. By Brian Breuhaus

Having no fear of humans especially little ones they came right up to us. One whapped our 3-year-old son in the face for no reason that we could tell. I quickly stepped out and tossed the bananas to the creatures before the monkeys wrestled them away from us.

We headed into the monkey temple, donning the sarong and sash required for the place that is holy to the Balinese.

Inside, as I snapped pictures, one of the monkeys suddenly became aggressive. He started chasing our 3-year-old, making him scream and cry in fear. Then the monkey started chasing me as our son clung to me. The monkey was still yapping at our heels as we got out of there. 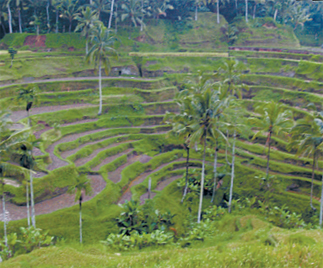 One of the amazing multi-layered rice paddies of Bali. This was taken near Ubud.

Still, we didn’t get chased again. Bali is one of the most magical places we’ve ever visited. Something like the Insadong of Indonesia, Bali is an island of Hindu artists in a Muslim country.

We visited shops and watched wood carvers, painters and puppet makers ply their craft, then sell their pieces for 5,000 ($4.83) won or less.

We arrived on a short Air Asia flight from Jakarta, where we’d been visiting friends. A taxi whisked us to our hotel in Sanur as we marveled at the carved stone sculptures we drove past. We stayed at the Paradise Plaza, which was a bit of a disappointment though the rooms were only about $60 a night.

The toilet leaked, even after two visits by maintenance men, there were ants in the bathroom and the breakfast buffet was a let-down. 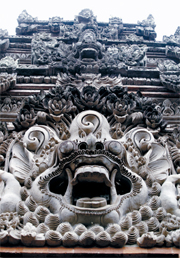 A close look at one of the temples on the island of Bali honoring Hindu gods in carved stone.

Although the hotel advertises beach access, we took the once-every-hour shuttle that took 15 minutes to get there ? and found about a 25-foot wide section of beach with the hotel’s flags marking it off. If the towels were too big, they might not have fit in the spot.

However, almost everywhere we went in Bali, we found something that surprised us. The drop-off point for the shuttle was the Bonsai Cafe.

To reach the beach, you had to walk into the cafe past close to 100 meticulously kept bonsai plants. “It takes a lot of work,” the guard there told me, in the understatement of the day.

After dipping our toes in the water, we drank cold beer and ate fresh fish at the cafe.

We relaxed as the waves lapped the shoreline. I didn’t even mind when their credit card machine broke and I had to run to a nearby ATM to pay the bill. Getting upset would have ruined the vibe.

The next three days, we hired a driver, about 40,000 won for eight hours, to explore the island.

More than 90 percent of the Balinese practice a unique form of Hinduism, which involves offering a sacrifice to the gods three times a day. We saw dozens of people set small tablets with fruit and rice placed in front of temples, then light a stick of incense.

I think the sweet smell will always remind me of the place.

That day we ate in Ubud at the Bebek Bengil, which translates as “Dirty Duck” in English. We just wandered into the place and were floored by its beauty. We dined on deep-fried duck in the open-air restaurant overlooking a working rice paddy.

During our time with the driver, we also saw dozens of temples carved full of gods (even visiting one celebration), the island’s volcanoes, a rice paddy carved into the side of a mountain and, of course, the monkeys.

One night, I slipped away and got a Balinese massage for about 30,000 won. I’m a rookie, I freely admit. I’d never before gotten a package deal, but decided to give it a try: something called the full body scrub.

After a 70-minute massage that was incredibly painful at times (and included the masseuse jumping on my back, shiatsu style), I was rubbed down with some type of salt, I guess.

Afterward, the masseuse filled the tub in my room and sprinkled rose petals throughout.

Well, after about five or 10 minutes, I started to think that maybe I was supposed to go in the bathtub. The water was getting cold, after all.

So finally, I did, sending gallons of water over the edge. About a minute or two later, the masseuse came in and said, “No, no, no...”

It turns out I was supposed to go to the steam bath first, then finish it off with a soak in the petals.

We visited the volcano the next day. The land around it is still black with volcanic rock. The last eruption happened in 1994, and there have been about 20 of them since 1800.

Anyway, the view at the top is great, though you have to fend off a swarm of aggressive vendors.

We decided to take a quick look around the lake, before heading onward. Once there, we saw a fish restaurant with a sign saying it was recommended by Lonely Planet.

It looked good, we were in a hurry.

It was a bad sign for us when the waiter, after taking our order, zipped away on a motor scooter. We saw him come back and then leave again about three times.

Finally, about an hour later, our sodas arrived.

Another 45 minutes later, the fish came. We finally got back on the road, but didn’t get home before dark.

For our last day on Bali, we went to Nusa Dua, the all-resort section built during the past decade or so. Our destination was the Novotel Benoa Bali, which was fantastic and only $70 a night.

It was right on the ocean and featured gorgeous pools throughout. The food was delicious, too.
Our flight left early the next morning. We hated to leave.