It's a dog's life for abandoned pets

It's a dog's life for abandoned pets 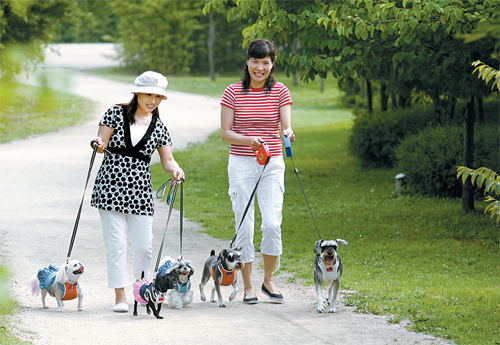 Kim Young-im, left, walks her three adopted dogs at a local park with Im Hyeon-gyeong, a woman who looks after abandoned dogs until they find permanent owners. By Jeong Chi-ho


When Kim Young-im dreamed about picking a fresh green apple in an orchard last fall, everyone around her said it symbolized childbirth. Instead, Kim thought the dream meant she should adopt an abandoned shih tzu that she had read about online. An animal rights group had rescued the dog.

“I think [the dog] knows she has been abandoned,” Kim says, gently petting the back of her puppy. She calls the dog Ggotbyeol, which means “flower star” in Korean. “She is still very conscious of how others feel. She never even barks at strangers.”

Kim can only guess what her shih tzu has been through. She thinks Ggotbyeol was physically abused before she was abandoned. Every time Kim holds a brush to comb her dog’s coat, Ggotbyeol jerks her head back in fright, she says.

Kim also suspects that her dog had been dumped from a car. During the first few times that Kim’s family took the dog out for a drive, it cowered on the backseat and drooled. Kim’s vet told her that this kind of behavior suggests the dog is anxious.

“I Love Pet” raises funds to help save pets. Pop singer Lee Hyo-ri supports the cause.

Dogs like Ggotbyeol are lucky to have found a permanent owner. For thousands of other unwanted pets, the Korean summer is cruel timing.

Every vacation season, the number of abandoned and lost pets in the city rises by 30 percent. Many people leave their homes for holidays, and places to house pets are expensive, according to Seoul government’s animal control division.

An average of 15,000 pets are abandoned in Seoul every year. As of last month, over 5,500 pets have been rescued in Seoul. Less than 20 percent find their owners or are sent to new homes. The rest are put to sleep or die of natural causes at animal shelters where abandoned pets are kept under protection for 30 days by law. 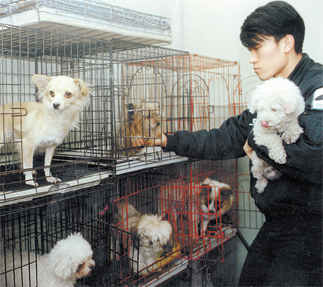 These abandoned dogs are kept in a local animal shelter. [JoongAng Ilbo]

Under the latest animal protection law, which was revised in January, authorities of designated animal shelters are only obligated to house abandoned pets for 10 days after they post the announcement looking for the owner. But among animal rights advocates, the period of reduction is becoming a problem.

“Whether they are looking for an original pet owner or a new owner to adopt the abandoned pet, 10 days is way too short to do anything,” says one animal advocate who runs World of Happy Abandoned Pets that entrusts abandoned pets facing “a due date” to individuals until the animals find permanent owners. “It shouldn’t be called an animal protection law when the whole system is not based on giving chances for the animals to live but to be killed.”

To reduce the number of animals that are put to sleep and the pressures of the 10-day deadline, some vets in Yongsan and Gangnam Districts have begun treating abandoned pets using municipal government funding. When the animals recover, they are sent to new homes for adoption. As part of this community project, the vets neuter and release stray cats. Celebrities have taken part in the movement to save abandoned pets as well. Recently, local pop singer Lee Hyo-ri initiated a fund-raising campaign to save the lives of abandoned pets.

In defense of the 10-day ruling, authorities say that most animal shelters lack the resources to tackle demand, causing distress for the caged animals. An official at the Seoul city government adds that most pet owners find their lost animals in the first week. 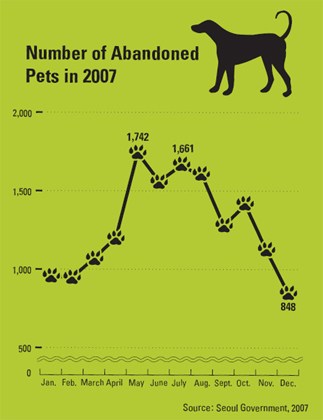 “The chances of pet owners coming to the facility to find their lost pets after 10 days are very, very low,” says Park Yong-cheon, an official at the city government’s regional economy division.

Money is another factor. “The annual cost to accommodate the animal facility is 1.3 billion won ($1.25 million). That’s a major burden for the local government,” Park says.

But many animal advocates point out that the high number of pets abandoned here is related to the idea of viewing animals as inanimate beings.

The idea of pets as ornaments is a widespread notion here. An anonymous source at the Korea Animal Rescue and Management Association, a state-run animal shelter that houses abandoned pets, says when abandoned pets face their “due date,” staff select some purebred pets that are healthy and small. They are thought to have a higher chance of finding new owners. Most owners give up their pets here when they grow too big, get sick or develop behavioral problems.

“If a family has problems adjusting to a new dog because it barks too loud, it’s better to surgically remove the dog’s vocal cords than dump it on the street or kill it,” says Im Hyeon-gyeong, an animal advocate who has taken two puppies facing euthanasia out of a public animal shelter and looked after them until they found new owners. “But people don’t often make that extra effort because they don’t see animals as precious living creatures.”

Owners found guilty of abandoning their pets are currently fined 200,000 won. But it is virtually impossible to penalize transgressors because it’s not easy to find a pet’s owner when an animal is abandoned in Korea, and even if the owner is identified, they could easily take the animal back, saying the pet was lost.

But the new law is expected to settle some of these issues. As of January, the local Ministry of Food, Agriculture, Forestry and Fisheries made it mandatory for all pet owners to register their pets and attach tags.

As an extreme measure, the government is also considering making it mandatory for owners to implant a microchip into their pets. The information stored on the chip will include the owner’s social insurance number, address and phone number.

The original idea for the microchip was to help lost pets, but the plan is also to prevent people from dumping their pets.

“It used to be worse,” says Kim Jung-han, a vet who runs Hans Animal Clinic in Hannam-dong, Seoul. “People treated their pets more like toys. Even now, when young, single people come into the clinic and express their wish to adopt a pet, I always ask them first whether they can keep their pets in their new homes when they get married and have children. People don’t realize that these animals can live up to 15 years. If they can’t be responsible for their animals for the entirety of their lifetime, they shouldn’t be taking them in the first place.”

Meanwhile, Kim, the owner of Ggotbyeol, recently adopted another abandoned puppy, one of mixed poodle and Maltese stock. When Kim takes her out for a walk, she is frequently asked if Ggotbyeol is a purebred. Passersby are curious to find out why Kim adopted a mutt, which is considered the cheapest kind of dog.

“I think many people still get pets in Korea just to show off,” she says. “For them, it’s a status symbol. But even the slightest burden is enough to make them give up their pets. It’s so sad to see that so many pets are adopted and then dumped on the whim of their owners.”