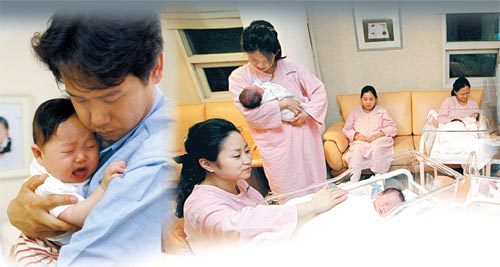 Doctors say women who are given support and understanding are less likely to experience postpartum depression. [JoongAng Ilbo]

“I’m so afraid I will kill my baby. There’s so much I have to deal with. I feel that it’s all because of him.”
This was the shocking confession of a 30-year-old woman who gave birth to her first son 24 months ago.
“Looking after the baby, fighting with the in-laws, slacking off at work. Just everything seemed to have gotten out of control. If it hadn’t been for the baby, it wouldn’t have been this way. If it weren’t for the baby…”
Kim, not the woman’s real name, eventually realized that she had more than just the so-called baby blues. A psychiatrist prescribed antidepressants and more therapy when Kim visited with her husband earlier this week.
Kim is typical of thousands of Korean mothers who experience postpartum depression every year. According to data compiled by CHA General Hospital, which specializes in women’s health, there were 2,361 therapy sessions at the hospital for women suffering from depression, either during or after pregnancy, from January to October 2006. That’s more than double the 1,090 sessions that ran three years ago. 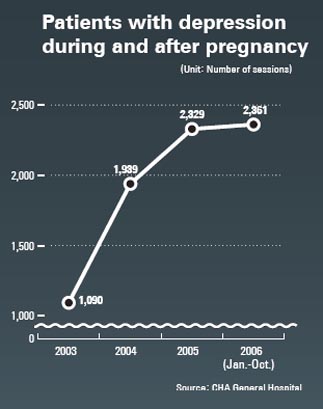 “Women of today are more empowered, knowledgeable and outspoken than before,” said Suh Ho-suk, a professor of psychiatry at College of Medicine of Pochon CHA University and psychiatrist at Kangnam CHA General Hospital. “Talking to my patients, I see that more women find it hard to put up with the stress factors of caring for a new baby. Also, social bias toward seeing a psychiatrist has improved, albeit slightly. And this in turn helps the psychiatric community acknowledge the illness and its gravity.”
Postpartum blues, otherwise known as baby blues, are mood swings that occur within the first two weeks following childbirth. Studies show that 50 to 80 percent of mothers experience these kinds of emotional fluctuations, according to the National Institutes of Health in the United States. One minute, they feel happy, and before they know it, they find themselves crying.
“In the postpartum period, the mother’s hormone levels go through dramatic changes, which trigger a jumble of powerful emotions. Just imagine having a foreign substance within your body for 10 months and suddenly letting it out,” explained Ha Ji-hyeon, a psychiatrist at Konkuk University Medical Center. “Symptoms include crying or feeling stressed, but as hormone levels stabilize, these feelings tend to subside.”

But it’s another story when the emotional roller coaster doesn’t stop. A major form of depression, known as postpartum depression, affects 10 to 15 percent of women any time from a month to a year after childbirth, the NIH says. If the condition goes untreated, it could worsen months later. That’s what happened to Kim.
According to the American Psychiatric Association, women with postpartum depression may have difficulty sleeping, problems with their weight, loss of energy and motivation, a sense of worthlessness and feelings of guilt.
“Everybody said how pretty my baby was, but I didn’t see that at all,” said a 28-year-old mother with an eight-month old son. Refusing to be named, she suffered from postpartum depression until very recently.
“I didn’t even want to see the baby. I hated listening to him cry so I usually slept in a separate room. I would spend days fighting with my husband. At times I had some bad thoughts like running away or even ending my life.”
In extremely rare cases less than 1 percent of new mothers women may develop something called postpartum psychosis, which require immediate hospitalization. Symptoms may include confusion, disorientation, paranoia, irrational thoughts, delusions and hallucinations.
In April, a 20-year-old mother who strangled her 18-month-old daughter at their home in Gwangju, South Jeolla, last December, was sentenced to a three-year suspended sentence. The baby’s constant crying had proved too much for the mother.
The ruling read “although the killing of a child should be severely punished, the accused had a prior record of depression, and she was in an severely fragile mental state due to postpartum depression at the time of her crime.”
The lawyer quoted her psychiatrist who said the woman had been suffering from anxiety and despair days before she committed the murder.
In 2006, a 28-year-old mother who drowned her children was also sentenced to a three-year suspended sentence.
Suffering from postpartum depression, she tried to commit suicide with her 2-year-old son and three-month-old daughter in Tongyeong, South Gyeongsang, on August 2005. She only managed to kill her children.
The mother was sentenced to five years in jail in the first trial, but in an unprecedented ruling, the judge annulled the original sentence to opt for a reduced one. 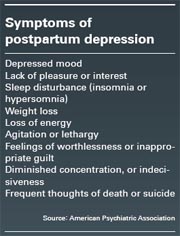 The court said that a psychiatric test showed that the woman was in an extremely unstable mental and physical state due to postpartum depression and that even her husband and in-laws had asked for leniency.
Health care professionals say postpartum depression is preventable and can be treated with medicine and therapy. Of particular importance are social networks.
“Knowing that they’re not alone and they’re not to blame is the greatest cure,” said Yoon Hee-ja, the manager and head nurse of CHA General Hospital’s Post Natal Care Center. “It really helps to be surrounded by other women who are experiencing similar symptoms, and talk with them and share their stories.”
The center offers postnatal care and education to new mothers for two to three weeks after childbirth.
“There are mothers who lock themselves in their rooms or refuse to see the baby. For them, we give special attention and encourage them to mingle with others.”
Doctors also recommend physical activity with friends and family, doing something fun, listening to music or watching a favorite TV show. “Postpartum depression is not just self-destructive, but also a potential danger to the family as well as community,” said Suh, the professor of psychiatry at Pochon CHA University.
“Studies show that depressed mothers can delay an infant’s development. A healthy mother-child relationship is vital, especially immediately after birth, as the first year of life is a critical time in cognitive development,” Suh says.
Earlier this week, I visited Suh’s clinic. One of his patients was yelling at her husband, sobbing with frustration.
Her husband did his best to comfort her. It’s all he could do.