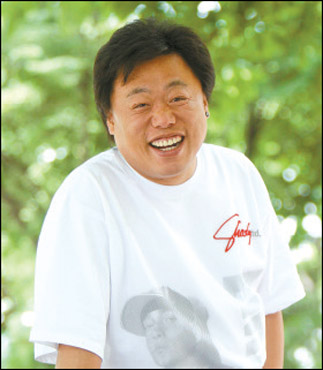 Comedian Baek Jae-hyun is now a huge success in stage musicals. He will have two shows performing at the same time in Seoul next month. By Kang Jeong-hyeon

It would be unfair to label Baek Jae-hyun, 38, as just a chubby comedian who makes people laugh.

Baek has re-established himself as a major figure in the Korean musical industry. He is not only a musical performer but also a producer, director and writer.

“Lunatic,” a musical that Baek created and performs in, has been playing to packed houses for the last four years.

The comedic musical started out in smaller venues but it is transferring to a larger stage on July 8: the Sejong Center for the Performing Arts.

Additionally, another musical that Baek produced, “Sky Walk,” a musical that incorporates B-boy dance performance, will be staged starting July 4 at the National Theater of Korea.

This means that Baek has two premium theaters here showcasing his musicals next month.

It doesn’t stop there. Another Baek musical, “Steam-Family,” a musical about the Korean martial art taekwondo, is scheduled for an off-Broadway run in October this year.

“All of this just didn’t fall out of the sky one morning,” Baek said. “Projects that I’ve been working on for a long time are finally reaching the spotlight.”

While in his sophomore year at the Seoul Institute of the Arts in 1989, Baek debuted in the musical “Guys and Dolls.”

In 1995, he directed his first musical, “Wholesome Patient,” and in 1999 he was involved in another show, “Christmas in the Underworld.”

While working on his musicals, Baek also did television. Hired by KBS in 1993, Baek started to make a name for himself on the comedy show “Gag Concert.” But rather than immediately airing on television, the comedy show was performed at small theaters in Daehangno, central Seoul, before its first national broadcast in 1999.

Baek was one of the top comedians in 2000, but he quit TV and went back to Daehangno. When people ask why, Baek said he wanted to get back to his roots.

The idea for the Lunatic was inspired by Neil Simon’s “The Good Doctor.”

When it debuted in 2004, Baek almost went bankrupt, but news soon spread that the show was a hit and Baek was saved from destitution.

Baek said the off-Broadway show later this year is just yet another experience, and he hopes to enter Broadway properly with Lunatic.

“It is a musical Korean audiences enjoy so much,” Baek said.

“Wouldn’t other people around the world feel the same?”