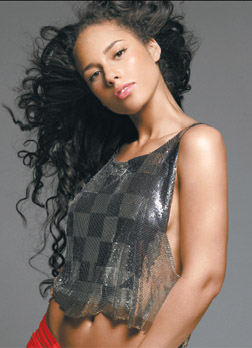 Some say she’s a female Stevie Wonder or an equal to Aretha Franklin.

At the age of just 27, Alicia Keys dominates the world music scene as a talented, sexy and confident R&B singer/songwriter/producer. She took the world by storm with her 2001 debut, “Songs in A Minor,” which sold more than 10 million copies worldwide and earned her five Grammy Awards.

Her latest album “As I Am” debuted on the record charts at No. 1 and has sold over 5 million copies in just six months. Since May, Keys has been on a world tour to promote the album in the United States, Europe and Asia.

The native New Yorker songstress will be performing in Seoul on Aug. 7 at Jamsil Gymnasium. Ahead of her Seoul concert, she talked to the Joong-Ang Daily about her concert, music and more.

Q.What was your main focus and concern when making your latest album “As I Am”?

A.The creative process was different for As I Am than the first two albums, mostly because I was just in a different space. I learned so much about myself that I wanted to take away any kind of inhibitions. And I just wanted to allow myself to explore music in a brand new way.

So, even with myself, the way that I worked and the process of working was just more full of abandonment. It was experimental and I didn’t put as many restrictions on myself. It just happened this way and I think that helped me create some of the best music so far.

What is your favorite track and why?

“No One” is a special song for me on my album. It is really great because it was such a combination of sounds. It has like the classical piano line mixed with this vintage keyboard I have been using called The Jupiter, which reflects a lot of the vintage sounds I’ve been putting on the record.

And musically, it’s just so simple and direct. It has this pulsing, kind of kick that is just unrelenting. But at the same time, the vocals are sparse and soulful, filled with yearning. When you have a good thing, when you have a great relationship, a lot of times things try to get in the way of that or break it up. [The song] talks about fighting for, and not letting anyone get in the way of, a good thing.

What was your inspiration for the track “Superwoman”?

My inspiration for “Superwoman” was a personal one. I was going through a little bit of a hard time and I was just feeling down. I couldn’t really shake the mood. When it wouldn’t go away, I was starting to get a little worried. It just wanted to say [in the song], that even when you’re off, even when you’re a mess and when you’re out of it, and everything’s just a wreck, you still gear up and you put on your vest with an “S” on your chest. You’re still a superwoman.

It’s okay even if you’re curled up in the fetal position in bed crying, you’re still a superwoman. Because just to admit your weakness is a strength.

To just be able to let out those emotions and keep on going is a strength. And so all the things that we deal with every day, we’re all superwomen, superheroes and supermen.

With all of your commercial and critical success as an artist, what keeps you motivated?

I feel very grateful for that and actually really humbled by [success] because I didn’t ever expect anything. You don’t know what is going to happen even when you’re doing something creative. People could love [your work], or they could hate it. That’s the thing about creativity. It’s never wrong. What keeps me motivated is just the excitement of being able to create great music and being able to reach people.

To be able to go into a school where 600 to 1,000 young people want to listen to what I’m saying because they respect what I do, that’s a great power to have. I definitely want to exercise that in as many ways as possible in a positive way.

What can Korean fans expect from your upcoming Korea concert? Will it be any different from other concerts in the tour?

You can always expect the unexpected. I think that you can expect to not know exactly what I’m going to do.

But there’s going to be a lot of diversity, and that’s what I love to give people an experience when they come to the show and they’re never disappointed.