The journalist and missionary who defied Japan

The journalist and missionary who defied Japan

Bethell’s funeral was attended by thousands of Koreans from across the country.


History has shown that people will fight beyond the call of duty for the freedom of their people and country.

But just how far will they go for the rights of a faraway nation they barely know, with which their own country has no bilateral interests and to which they have no personal ties?

Throughout history, some people have been noted for risking everything freedom, the comforts of home, career and family to help win independence for another country.

In this case, it was a small country in Northeast Asia called Daehanjeguk, the Great Han Empire, now Korea. 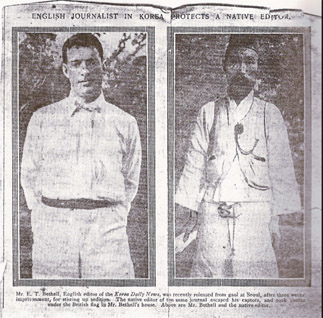 Some 400 foreigners missionaries, diplomats and soldiers are buried on a small hill overlooking the Han River in Hapjeong-dong, northern Seoul. They either called Korea home or enjoyed special relations with the country.

The Yanghwajin Foreign Missionary Cemetery the Seoul Foreigners’ Cemetery until May 2006 was established in 1890. Horace Allen, the first U.S. Protestant missionary physician in Korea, used his connections to obtain the site upon the death of John Heron, another U.S. Presbyterian missionary doctor, who came to Korea in 1885. 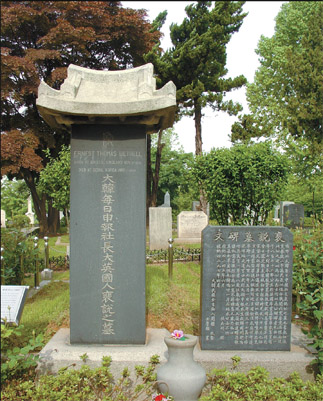 Today the storied cemetery is surrounded by busy streets and traffic, stacked stores and houses and to top it all, endless road construction. But once you’re in the cemetery surrounded by tall, green trees, all is silent. You are walking through history, among the graves of people from overseas who came to help Korea in its time of need.

“This is the grave of Ernest Thomas Bethell, a British journalist who founded Daehan Maeil Shinbo,” said a small, thin woman leading a group to a large gravestone in the middle of the cemetery.

Lee Gyeon-hyo, 67, a member of the 100th Anniversary Memorial Church, volunteers as a tour guide at the cemetery. 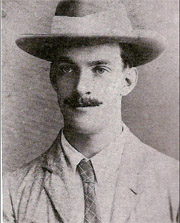 Bethell died in 1909. Provided by the Bethell Memorial Committee

“He wasn’t afraid to tell the world about Japan’s atrocities in Korea. He was subsequently treated very badly by the Japanese. My heart breaks whenever I introduce people to his grave,” Lee said, her hands clasped to her chest.

A red rose and a yellow rose had been placed in a stone jar at the grave. They looked like they had been there for a few days. Next to them was a metal marker inscribed “Man of merit for the national independence of the Republic of Korea.”

Bethell (1872-1909) was born in Bristol, England, and came to Korea in 1904 to cover the Russo-Japanese War as a foreign correspondent for the London Daily News. But after witnessing how Japan was devouring Korea, the hard-nosed journalist knew he had to tell the story, both locally and to the outside world. 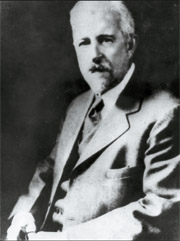 Homer Hulbert, earned the trust of King Gojong for his devotion for Korea’s independence.

Bethell quit his job and founded two new independent newspapers with the activist Yang Ki-tak: Daehan Maeil Shinbo and its English edition called the Korea Daily News. It printed graphic stories about atrocities that the editors said Japan committed. The Briton instantly became a major thorn in Japan’s side, but he was protected by his British citizenship at least, at the beginning.

“Self-interest was the last thing on Bethell’s mind. As an investigative reporter, I’m sure he knew he had more to lose than gain,” said Jin Chae-ho, chairman of the Bethell Memorial Committee, a non-profit group that organizes an annual commemorative event for the late journalist.

“For Bethell, it was a matter of human dignity, peace and justice. He used journalism as a means to achieve those ideals. At the root of the March 1st Movement and other similar uprisings that followed was the courageous spirit of Bethell and his paper.”

In March 1908 a Korean nationalist killed a pro-Japanese U.S. official, Durham White Stevens, in San Francisco. Following the incident, Bethell’s Korean paper printed a report of the assassination. The headline read “Details of the attack upon the scoundrel Stevens.”

The Japanese persuaded the British to help them close down Bethell and his newspapers. With World War I imminent, Britain calculated that amicable relations with Japan were worth more than the life of one journalist.

In June 1908, Bethell was accused of causing tumult in a country which was a de facto protectorate of Japan. He was sentenced to three weeks’ imprisonment and deported to Shanghai, where there was a British prison.

He came back to Korea the following month, but died a few months later at the relatively young age of 37. Historians agree that imprisonment and torture played a part in his untimely death.

“Ernest Bethell used his position as a journalist to provide a voice for the Korean independence movement,” said Tom Warwick, head of the Public Affairs Division at the British Embassy in Korea. “His newspaper made a powerful rallying call for those who had been denied the right to speak out. We hope that Bethell will be remembered as someone who recognized the importance of freedom of expression.”

King Gojong (1852-1919) had hoped Bethell and his newspapers might help restore independence. He wrote a letter of condolence lamenting, “How can the heavens be so indifferent and take him so fast!”

Bethell was posthumously conferred the Order of Merit for National Foundation in 1968.

“Our goal now is to build a memorial hall for Bethell,” said Lee Jae-ryong, the vice chairman of the Bethell committee. “We have finished the blueprint, but have yet to secure a site for it. We hope to start construction next year.”

Another foreigner who devoted his life to Korea’s liberation was Homer Hulbert (1863-1949), an American missionary in Korea and the editor of the English-language monthly magazine Korea Review. Hulbert first came to Korea in 1886 to teach English. His devotion to Korea and affection for Koreans helped him gain King Gojong’s trust.

In 1905, he went to the United States to deliver to President Roosevelt the king’s protest against Japan’s colonial advances on his country, but to no avail. However, Hulbert managed to appeal to the American people through the media.

“[Gojong] declares the agreement of Nov. 17 null and void because [it was ] obtained under duress,” Hulbert is quoted as saying to the New York Times on December 14, 1905. “Korea is weak. Is the square deal only for the strong? [...] The Japanese were bent on plunder, Korea’s independence was destroyed, and now the Japanese will be enabled to continue their outrages against the Koreans without fear of interference from the outside.”

Hulbert returned to Korea the following year and suggested that Gojong shed light on the independence issue at the Hague Peace Conference in the Netherlands in 1907. The following March, he went to Hague with Gojong’s credentials and tried to help a secret mission comprising three patriots Yi Jun, Lee Sang-seol and Lee Wi-jong to reach the conference.

The mission was thwarted by Japan when it uncovered Gojong’s plans.

On May 8, 1907, Hulbert was compelled to return to the United States. “Japan had Hulbert under such close surveillance that there was a separate official to watch just Hulbert,” said Jane Kang, public relations manager of the Hulbert Memorial Society.

“Even after he returned to the U.S., Hulbert devoted his time to telling Americans about what was happening in Korea in newspapers, the U.S. Congress, through seminars and lectures,” Kang said.

Hulbert returned to Korea on July 29, 1949, upon the invitation of the late President Syngman Rhee in appreciation of his contribution to Korean independence. But the 86-year old Hulbert fell ill after just one week and passed away.

Hulbert, buried in the Yanghawjin cemetery, was also awarded the Order of Merit for National Foundation.

His tombstone reads, “I would rather be buried in Korea than in Westminster Abbey,” something that Hulbert said to a reporter as he left the U.S. to return to his adopted homeland.

The Hulbert Memorial Society plans to gather all articles and dissertations Hulbert wrote about Korea and publish a book later this year.