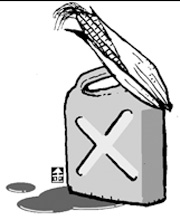 If we ferment grains such as corn and sugarcane and then refine them, we get ethanol. If we mix that with gasoline, then we can use it as fuel for automobiles. This is an energy source called either biofuel or bioethanol. In view of humanity’s task of decreasing the emission of greenhouse gases, which is the main cause of global warming, the supply of biofuel and eco-friendly alternative energy should be highly encouraged and welcomed.

However, the real situation is the opposite. Biofuel was the subject of discussion at the United Nations High-Level Conference on World Food Security held at the beginning of last month in Rome with 88 cabinet members and 45 heads of state participating. About 100 million tons of grains, which should have been used to fill the stomachs of hungry people, are used annually to produce automobile fuel, causing a grain price increase.

The United States and Brazil produce two-thirds of global biofuel and have hurriedly defended biofuel’s influence on the grain prices as minimal. The George W. Bush administration of the United States doubled the consumption of biofuel in order to respond to the oil price surge and insecurity in Middle East and proclaimed that in the next 10 years, it would decrease oil consumption by 20 percent. Brazil began to develop biofuel produced from sugarcane after the oil crisis in 1973 and uses it daily now.

The opinions of the U.S. and Brazil came into conflict with those of other countries at the food security conference, such that no clear resolution was made on biofuels.

News outlets last week reported that the Japanese have decided to produce biofuel with leftover rice. Some 360 people from a farmers’ association decided to test-produce bioethanol from cheap rice that yields more, instead of high-quality rice. This happened in Niigata, famous for being the origin of an expensive rice species called Gosihikari. The Japanese government also plans to use parts of the 1.5 million tons of rice stored in case of a food crisis to produce ethanol. This is in the midst of high international pressure to distribute stored rice in order to contribute to the stability of grain prices.

On one side of the globe, there are people who are starving because of the grain price surge, while on the other side, there are more cars using fuel made from grain instead of oil. People can live without cars, but not without food. It is humanity’s task to solve both the environment crisis and the food crisis. One solution from the food conference is to use second-generation biofuel made with non-food vegetables. It has started to be developed in Europe.