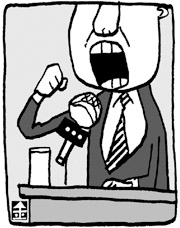 Representative Chun Jung-bae of the United Democratic Party apparently joined the protesters in Gwangwhamun and said, “I think your requests are justified. I am here to support you.” Soon after however, sarcastic comments about his actions poured forth on message boards and forums throughout the Internet.

This is the same Chun who served as Justice Minister for the Roh Moo-hyun administration, and said, regarding the Pyeongtaek protests of 2006, “Violence should be punished.”

There is a story in the book “A Radical American Vision” by American historian Howard Zinn, about a student at Harvard University who delivered a speech in front of gathered parents and graduates. At that time in the 1960s, American society was divided over anti-Vietnam War demonstrations.

The student said, “Our streets are in turmoil. Universities are full of students who lead the uprisings. Communists are watching for an opportunity to attack us. We can not survive without law and order.” After making this point he paused, while the audience passionately applauded, before adding, “My speech is the same as the one delivered by Adolf Hitler in 1932.”

Although the message about law and justice is the same, it has a different meaning depending on who said it.

The following article found on the Internet may be easily misunderstood as an article written by the Grand National Party, with views strongly criticizing “PD Diary,” the controversial MBC program. It said, “We need to learn two lessons from the candlelight vigils. One is that a TV program should not be edited with political intent. The principle of reporting is to help viewers to reach their own decisions, not lead people to agree to its conclusions. Second, netizens should lose their habit of being easily thrown into excitement when manipulated by media. It is wrong to resort to violence in groups.”

However, these are not the words of the conservative GNP. They come from a story written by leftist social critic Jin Jung-gwon in 2004.

The issue of U.S. beef imports has plunged our society into chaos. Whether left or right leaning, people are trying to attack others by rehashing old commentary.

Discussion and tolerance have given way to ideological confrontation and witch hunts. We are concerned that democracy and the freedom of expression might be destroyed if we can not write or speak freely.

The Vatican made an official apology in 1992 for its witch hunt and trial of Galileo Galilei, over 360 years after the heliocentric theory appeared.