Actors Chang Chen (left) and Takeshi Kaneshiro from John Woo’s “The Battle of Red Cliff.” Provided by the organizer

At age 10, director John Woo used to stay awake at night drawing the characters from Chinese historical novel “Romance of the Three Kingdoms” on his window.

He used a lamp to project the characters onto the wall where he would make shapes move shadow puppets.

Fast forward 50 years and those childhood images are bound for a wider screen, fleshed out by award-winning actors Tony Leung, Takeshi Kaneshiro and Chang Chen.

Woo’s war epic, “The Battle of Red Cliff,” will be released next Thursday across Asia. The Chinese blockbuster was co-produced by Showbox, a Korean film distributing company, and it cost a 80 billion won ($76.48 million) to make. 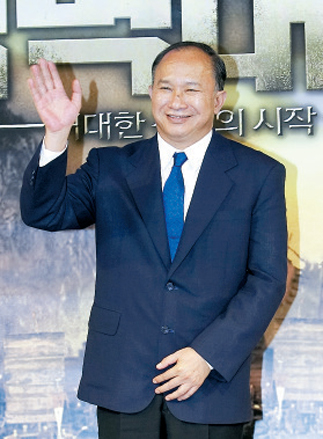 The film’s Asian premiere was held at the W Hotel in Gwangjang-dong, eastern Seoul, last week.

“I had always felt that Western films lacked a true understanding of Asian culture,” said Woo, a Hollywood-based Chinese director.

“I truly wanted to capture the courage and wisdom of Asians and their culture.”

The story of The Battle of Red Cliff dates back to the year 208. When Liu Bei (You Yong) is hit hard by Cao Cao’s million-strong army, the wise scholar Zhuge Liang (Kaneshiro) proposes an alliance with ambitious emperor Sun Quan (Chang Chen).

But Quan, terrified of the scale of Cao Cao’s army, hesitates. Instead, Liang secures an alliance with Zhou Yu (Leung), Quan’s brave and great commander. Yu later convinces Quan to join the alliance.

The three ? Liang, Quan and Yu ? head together to the red cliff where they fight Cao Cao and his army. Meanwhile, Cao Cao is charmed by Yu’s wife, Xiao Qiao (Chi-ling).

“There are many ways to cast actors,” Woo said. One way is to go with a hunch, he says, and another way is to cast first and correct the script later to match the actor.

But selecting the lead for Red Cliff was different, says Woo.

“I had to consider many more factors since the story is based on history [the Three Kingdoms that shaped later China],” he said.

Yu had to be someone vigorous with a big heart. He had to be able to threaten but not harm his alliance, Liang.

“Leung was perfect for playing such a man,” Woo said.

Liang, played by Kaneshiro, was 27 when he went into battle.

“He [Liang] was handsome, smart and passionate, just like Kaneshiro,” Woo said.

Woo had to keep a special eye on the charismatic Quan, a character played by Chen.

“Though alluring, Quan suppresses his ambitions,” Woo said, noting that later on, Quan changes and honestly follows his will.

“Chen is well cast as Quan.”

Acting well-known historical characters was a burden for actors Chen and Kaneshiro at first.

But they each had ways and means to overcome the challenge.

“I had more drama than action,” Kaneshiro said, noting that his character was more at ease compared to other characters.

Playing a new character, Chen said he tingled with excitement. The fancy clothes and expansive landscapes were new to him.

Originally, the director had wanted to make the film after he finished filming “A Better Tomorrow” (1986), starring Chow Yun-fat and Leslie Cheung.

But he didn’t get the chance to film such a grand-scale historical feature.

“I’ve been preparing for this move for a long time,” Woo said.

“It’s different from the existing film about the Three Kingdoms, which is called ‘Three Kingdoms: Resurrection of the Dragon,’ or any story-based drama. [My] film brings out more humane stories tangled with the characters’ psychology and life events.”

Chen hopes that each viewer finds something in each character to take home with them.