[Talk of the town]Park Ji-sung, well-suited to life as a model footballer

[Talk of the town]Park Ji-sung, well-suited to life as a model footballer 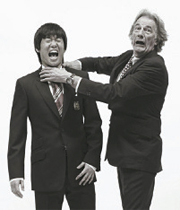 He recently had a photo shoot for Arena, a British monthly men’s fashion magazine, along with designer Paul Smith (right).

The catalogue of the photo shoot will appear in July’s edition.

Last May, the club entered a partnership with Paul Smith, the London-based designer.

He will now dress the players, staff and officials for domestic matches as well as preseason tours.

Creepy days ahead online as cult horror classics arise from the vault Expect a haunting summer.

The Korean Film Archive is playing some 1960s and 1970s Korean horror films this month for free on its Web site, www.kmdb.or.kr/vod.

Most of the eight films are about legends linked to traditional Korean literature and han, a Korean emotion for lamenting or regret.

A Devilish Homicide depicts the story of a dead woman returning as a spirit seeking revenge on her murderers.

Meanwhile, the archive, which opened its video site last November, currently plays other genres including Korean classics and documentaries.

A Korean traditional wedding is the talk of the town, at least for Jason Filardi, the scriptwriter for the film “A Korean Wedding.”

Filardi, who wrote the comedy “Bringing Down the House” in 2003, based his film on his cousin, Iain McConnel, who married a Korean.

According to CJ Entertainment, the film looks at the cultural differences between an American man and his Korean fiancee who have a traditional wedding.