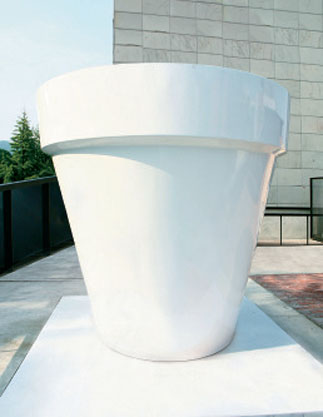 French artist Jean-Pierre Raynaud had lost all hope in 1961, after serving two years in the Algerian War (1954-1962). His experience in the war had left him in extreme mental distress. He stayed in bed all day, blinking at the wall. He feared the world because of the brutality he had seen it cause.

One day, Raynaud found a small flowerpot in his garage. He filled it with cement, an act meant to signify the blocking of all forms of life. It turned out to be the first in his “Le Pot” series, and a new step in his life as a sculptor.

“Le Pot Blanc,” a big white pot, is on display through July 15 on the roof of Hakgojae Gallery in Sokyuk-dong, central Seoul, along with other installations. “Raynaud broke away from the conventional images of objects,” said Jung Ji-young, the gallery’s curator. “To him, a pot no longer has the function of giving life, but one of recovering from tragedy.”

The 69-year-old artist has been making pots for 30 years. Of note is “Le Pot Dore (The Golden Pot)”; one is installed in the Forbidden City in Beijing and another can be found at the Centre Pompidou in Paris.

Raynaud, who has visited Korea, considered the country a white pot, referring to Koreans as “those clad in white.”

Installations of paint cans are also featured, as well as paintings of the names of renowned artists like Vincent van Gogh and Pablo Picasso. “To Raynaud, the images that pop up while reading certain words are themselves art,” the curator said.