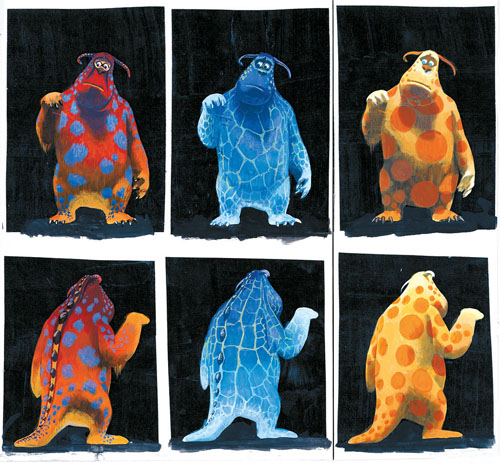 
When Woody, a 3D animated cowboy character, appeared on the big screen for the first time in 1995, it was without doubt the dawn of a new era in feature animation history.

Pixar has captured the imagination of the world since then, bringing the audience to unlikely places, from the depths of the ocean to the kitchen of a restaurant in Paris in its films including “A Bug’s Life,” “Monsters, Inc.,” “Finding Nemo,” “The Incredibles,” and its latest film, “Wall-E,” which is scheduled to be released early next month here.

Starting yesterday, the opportunity to sneak a peek behind the scenes of Pixar animation is available at the Seoul Arts Center under the title “20 Years of Animation: Pixar Exhibition in Seoul.”

The exhibition will continue until Sept. 7.

Before arriving in Seoul, the Pixar exhibition traveled to New York to be displayed at the Museum of Modern Art, to London at The Science Museum, Toyko’s Mori Arts Center, The Royal Museum in Scotland, ACMI in Australia and Helsinki City Art Museum in Finland.

More than 650 rough sketches, sculptures and storyboards by 80 artists who have worked on the finest Pixar animated featured films will be on display.

Basically, all of Pixar’s secrets will be shown for the enjoyment of the public.

Visitors will have the chance to see how Woody initially looked before his debut in “Toy Story,” as well as how the films are illustrated and painted before being filmed. This includes color scripts, where the creators get the opportunity to see the scene’s color, mood and sequence before it is inputted in the computer.

At the exhibition is a Zoetrope, a contraption built by Pixar where images of 150 characters from the animated feature film, “Toy Story 2,” such as Woody, Buzz Lightyear and the Aliens are placed on a large disc that are spun rapidly to create the sensation of animation.

This device is designed to show the visitors the basic principle of animation.

The museum offers a special discount ticket for people over the age of 65. The exhibition opens at 11 a.m. and closes at 8 p.m.

Additionally, the exhibition will be closed on the last Monday of every month. For more information visit www.pixar2008.com or call (02) 561-4963.