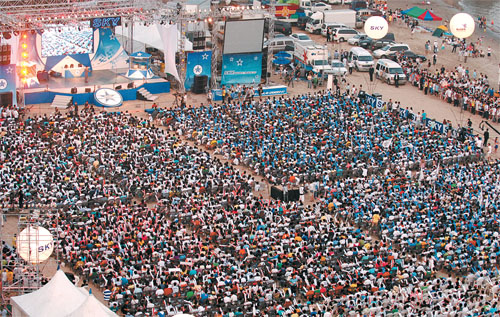 In a country as wired as Korea, pro-gamers, who play computer games for a living, have carved a niche for themselves in the job market, with some gaining a degree of celebrity among aficionados.

Korea has catapulted itself into the forefront of technologically savvy nations in the past decade, and playing games is virtually a national sport.

Of the 34 million people wired to the Internet, 55 percent play games, according to a recent study by the Information Ministry. In addition, approximately 20,000 PC bangs, or Internet cafes, have sprung up nationwide, providing a fertile breeding ground for pro-gamers.

But the pro-gaming industry is also facing challenges after a decade of growth.

Operating 24/7, PC bangs are often packed with teenagers, many dreaming of becoming the next star in the extremely competitive Pro League, which consists of 12 professional teams, 450 registered players and another 200 semi-professionals.

Depending on performance, a player’s annual salary ranges from 10 million won ($9,500) to 250 million won, excluding the bonuses.

Players with fast reflexes and brains to match command a cult-like following. There are currently two exclusive game channels that broadcast matches and roundups around the clock.

COEX in southern Seoul is one of two venues for professional bouts. On game day, hundreds of fans cheer and jeer while their favorite players compete in various online games, but it’s StarCraft, developed by the U.S. firm Blizzard Entertainment, that feeds this particular industry.

StarCraft, in which three imaginary space races battle for supremacy, has retained top spot in the gaming league here for the past decade since it was first introduced. Out of 9.5 million copies sold worldwide, almost half were in Korea.

Gamers from overseas have long been fascinated by the infrastructure and opportunities to make a living playing games in Korea. Korea even has a government department in the Ministry of Culture devoted to the gaming and pro-gaming industry.

French-Canadian Guillaume Patry from Quebec had a brief spell of success in the early 2000s when he joined the Korean gaming league. In his prime, he cracked the top 30 on a consistent basis. His ID “AMD Grrrr?” was instantly recognized when he logged on the Internet. He left the country in 2003. 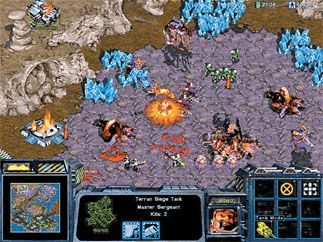 A game screen as seen on one of the TV channels that broadcasts professional bouts. [JoongAng Ilbo]

Perhaps because other countries lack the infrastructure or cultural acceptance, there are no professional players overseas. “No other country has a similar pool of players this size or quality. That is why it’s hard for people from overseas to come here and succeed,” said Danielle Lee, who coached Patry then and was instrumental in creating the Pro League.

While the term pro-gaming has certainly cemented its hold over Korea, the saturated industry needs a catalyst to move on to the next level, experts say.

The primary reason for the slowdown is that StarCraft has enjoyed a level of longevity that no one expected, they say. The game’s continued popularity rests with the existence of the gaming league. But similar to a car with many miles on the clock, the industry needs revamping.

“The league will go on but business product differentiation is needed to enlarge the pie for the industry, otherwise customers will look for something else,” said Cho In-ho, an official with the Korea e-Sports Association, which was established in 1999.

TV ratings for game competitions used to dominate the top 10 a couple of years ago, but they now barely stay within the top 20, according to industry officials. These two game channels draw an average 0.6 percent of TV viewership.

One gaming channel closed down in 2007 and more than half of the 12 professional teams have changed ownership in the last five years. Two other teams called it quits during the league’s short existence.


At the end of last month, Hanbit Soft said it would give up its rights to run its Hanbit professional team, one of the oldest in the league. After failing to find a buyer, the company said it would maintain the team until the end of this season. If no buyer emerges by then, the association has agreed to manage the team until it finds a buyer.


Yun Bok-geun, who used to manage the team, argues that the league is at a crossroads. “It’s hard to get a new fan base interested because playing games is no longer a new phenomenon,” said the Hanbit official. “What the league needs is a strategy to create fans from onlookers who know the game.”


Ahn Hye-eun, an official with the association, admits that TV ratings have dropped in recent years, but he says efforts to widen viewership are paying off. Internet portals such as Daum and Naver started to broadcast games last year.


She claims that the average daily hits for games are 700,000 a day. “We are comfortable with the current level of interest and the various channels,” said Ahn.


Some industry officials are worried about the dominance of the game in Korea’s professional gaming scene. “The huge popularity of the game has created a monopoly, which begs the question, what will happen if StarCraft 2 flops?” said an official of a major Internet company in Korea speaking on condition of anonymity. “Let’s just say there is a lot riding on the success of the game.”

Blizzard Entertainment has indicated that it wants royalties for the wide use of its next game, but the association has yet to clarify details with the U.S. firm.


Another issue affecting gaming here is age. Most die-hard followers are teenagers who tend to lose interest in gaming as they grow older. This is a problem for an industry thought to be worth 70 billion won, according to the Korea Institute for Industrial Economics and Trade.


“StarCraft was a hit because many people in their 20s and 30s played it, too. What we need is another killer title like that,” said Danielle Lee.


Industry officials say the operational costs, including salaries and benefits, of professional teams are sponsored by an array of companies that see gaming as a source for advertising.


“It’s much cheaper than operating a professional sports team, but there is not much actual profit to show for,” said Yun.


The industry won’t collapse overnight, experts say, but the young age of the league makes it vulnerable to shifting trends.


“The industry is based on capturing the interest and imagination of the consumer. So what happens when the consumer loses interest?” said Lee Chun-ho, a professor at Seoul Digital University. “There have been cases where the sequel to a game was unsuccessful and as a result the original game’s popularity eroded as well.”


While industry officials worry about the future of the industry, some fans are still fascinated by their heroes. But like professional sports leagues, these stars come and go.


Nowadays, Jang Jae-ho, 23, better known in the game world under his professional ID, “Moon,” is one such star. His forte is Warcraft III, an online game also developed by Blizzard. His fans here nicknamed him Andromeda, referring to a galaxy 2.5 million light years away. The nickname implies that anyone daring to stand against Jang will be kicked that far.


Jang was even invited to a ceremony celebrating the Olympic torch relay in China, and he is a member of MYM, a professional gaming team sponsored by a Danish firm.


Along with Counter-Strike, Warcraft is believed to be the most popular online game played worldwide, experts say. Jang ranks in the top tier with the likes of Manuel Schenkhuizen from the Netherlands and Chinese phenomenon Li Xiaofeng.


When Jang faced off against Li at the World e-Sports Games in 2006, an estimated 1.48 million Chinese watched the game over the Internet, according to industry officials in Korea.


In the game industry, the joke is on Korean pop singer Rain, as officials brag that Jang brings together millions of people for an event, whereas Rain’s fans number only in the thousands at concerts.


Last year, Jang earned 170 million won in prize money alone, making him one of the top earners in the industry. Besides the fight purse, his annual salary is 100 million won. He spends half the year abroad participating in international events.


In addition, StarCraft strategy books are best sellers, players endorse related products in TV commercials and even the Air Force has created its own professional team, granting special status to draftees ? little soldiering, lots of gaming.


With such tales of success and a high profile in society, it’s no wonder young Koreans try to enter the professional gaming world. There are even some colleges like Inha University in Incheon that offer special admission programs to pro-gamers.


Not missing out on a business opportunity, the nation’s largest conglomerate, Samsung, created its own professional team, “Khan,” in 2000. The company has also sponsored the World Cyber Games since 2001. Currently, Khan is the top-ranked team in the Pro League.


The aspiring career of some of the more successful pro gamers has created a farm system like in major league baseball. Players live and train together and sponsored by conglomerates or small companies.


The only concern cited by Korean parents famous for their extreme passion for education is that excessive gaming might put a dent into their kids’ study time.


Kim So-young, 39, whose son is at elementary school, says she accepts the idea that her son could become a professional gamer, but she said she would rather see him try to funnel his energy elsewhere.


“Pro-gamer? It’s not a stable job. Not everyone becomes a star. I would rather he became a doctor.”


Professional gaming has a season, draft and league

There are 21 disciplines of various games in which players compete, ranging from StarCraft to first-person shooting games such as Alliance of Valiant Arms.

The Shinhan Bank Pro League has been the gaming world’s big stage since 2003. A total of 132 games are played in the regular season, fives games per week from Saturday to Wednesday at the exclusive game stadium, the I’Park Mall e-Sports Stadium, which was set up in 2005. 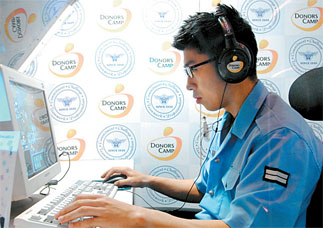 Lim Yo-hwan is a pro-gamer for the Air Force.[JoongAng Ilbo]

After the regular season come the playoffs, followed by the all-star games. About 120,000 people watched the finals last year at the mall.

The Pro League maintains a top 30 list of players, while the finals are played in a best of seven format. In addition to the Pro League, there is also the MBC Game Star League and Star League by Ongamenet.

The National Amateur e-Sports Games established last year serve as a route for amateurs in the countryside to get a crack at going professional.

In the case of StarCraft, matches are conducted once a month to discover new talent. Close to 1,000 amateurs usually try their luck here. Those who place in the top rankings get a semi-pro license and become eligible for the draft conducted twice a year. For other games, there is no draft. Once a player qualifies, the next time he places in the top rankings of an official tournament he gets a pro-gamer license.