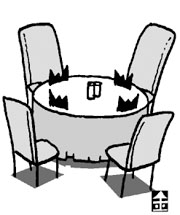 The Chinese sometimes use the word dong or east, to refer to the host. People believe this tradition came about from the “Records of Etiquette.”

Such etiquette that strictly distinguishes the guest and the host was abided by not only in China but also in Korea and Japan.

Having the host greet the guest standing on the eastern side symbolized order. The thinking was that each side had a proper role to play according to their position, and that they should stick to it.

Such etiquette also surfaces in Chinese and Taiwanese table manners. In China, the host sits in the middle of the side of the table looking out toward the door. On the other hand, in Taiwan, the host sits with his back to the door.

By the traditional thinking, in which the guest should be given all the respect, the Taiwanese way is closer to proper etiquette.

Rules of etiquette that take into account west and east and where to sit at the table all emphasizes the importance of one’s position in relation to others.

It is Chinese tradition that each person’s role be strictly abided by. At times, China gives the impression of being chaotic and distracted. But it still holds on as a powerful country even if it is building a market economy as a socialist country, because of its traditions.

It is questionable whether the Blue House has settled into its position and is acting accordingly, as the country has faced more than 50 days of candlelight rallies. Many illegal acts have been committed, but the countermeasures have been weak. The government resembles a bewildered cow that can’t figure out what’s going on. It’s a frustrating situation.

The government should now reclaim its position as the host of the nation, mandated by the people to enforce the law. It is impossible to manage a country without a strict level of order.

The same goes for opposition party lawmakers who are siding with the demonstrators. Short-sightedness yields nothing for anybody.

The writer is deputy international news editor of the JoongAng Ilbo