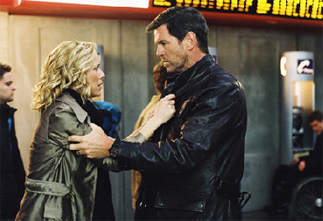 The Randalls were the ideal family and were the envy of their friends and co-workers. Neil (Gerard Butler), the rising star at an advertisement firm in Chicago, and Abby (Maria Bello), an ex-photographer, were enjoying their oh-so-perfect lives.

Little did they know that even a perfect bubble burst when vengeance and meticulous planning take place.

The nightmare begins when Tom (Pierce Brosnan) jumps from the backseat of Neil’s car and points a gun at him and Abby. In the midst of frenzy, Tom demands absolutely everything of the Randalls in the next 24 hours and declares that if they refuse, their daughter will die.

The plot seems quite mundane up to this point, for there are a number of films that deal with the bad guy testing the parents’ patience while gambling with their child’s life. You might have seen “Enough” with Jennifer Lopez, “Transporter 2” starring Jason Statham, and Bruce Willis’ “Live Free or Die Hard.”

With their daughter’s life in danger, Neil and Abby succumb 100 percent to Tom’s demands. An endless chain of ridiculous and incomprehensible requests follow that make Neil and Abby doubt each other’s trust and affection. Tom is simply trying to tear apart and ruthlessly smash a butterfly, Neil’s perfect life, under a monstrous wheel.

The truth about Tom and his motives to destroy the Randalls is unveiled when they reach the boss’s cabin. Here is where I felt a rush of disappointment: “Really? So that’s why Tom made Abey hand over the documents to Neil’s rival company?”

Thankfully, the boss’s cabin really wasn’t as it seemed. It was the home of the secretary Neil has been having an affair with.

Ha, what a completely unexpected surprise.

When I picture Tom at the fireplace, I think, “Did Neil have absolutely no idea what this random guy Tom’s motives were, when all this time he had been having a secret affair?”

Maybe it’s due to my long list of similar-themed movies that I’ve watched before, but throughout this one, I found myself trying to figure out a more exciting, mad and twisted ending on my own. Unfortunately, those extra swarming thoughts turned out to be quite unnecessary and better than the actual ending.

No, the movie does not end with Tom bursting into the house, fighting with Neil, and Judy crying her eyes out. One last twist waits, but I wouldn’t get too excited over it.

So what was under the facade of the seemingly perfect and happy Randalls? Let’s just say that anyone with a serious heart wound and vengeance can most definitely crush a butterfly on a wheel.

Butterfly on a Wheel