Diners praise BBQs from the rooftops

Diners praise BBQs from the rooftops 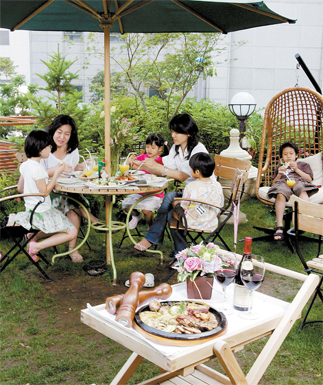 Families enjoy an outdoor barbecue on a rooftop garden at Urban Garden, a restaurant in downtown Seoul. By Ahn Yoon-soo

Ever wondered what the “secret garden” in Korea is famous for? The answer: a great barbecue.

It’s a joke that Koreans make, because a string of the country’s barbecue joints are often named such and such garden. If you count the city’s many samgyeopsal (pork belly) joints that swarm with office workers after work, grilled meat is certainly part of Koreans’ daily diet.

Yet even so or because of its wide availability ? barbecue, especially Western-style, was underrated here for a long time. Until recently, a barbecue party was only for wealthy house-owners who could afford a spacious garden and catered meals.

That’s changing as more landlords of villa houses and apartments are opening up their rooftops for private parties.

“Many of the guests I’ve had so far really appreciated the idea of having a barbecue without driving to the city’s outskirts,” says James K. Jeong, the owner of a villa in Itaewon who throws a barbecue party for friends on his villa rooftop every month. 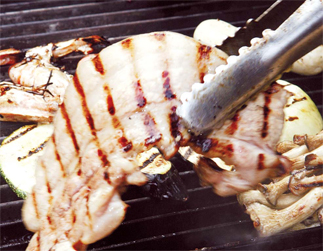 In 2001, Jeong completely renovated his rooftop. He built a kitchen, a portable pool, a large picnic table and a computer hooked up to audio speakers. So far, the themes for his barbecue parties have ranged from swing dancing to a piano concert.

But even without a private rooftop, other options are available.

One way is to simply dine out. Some of the city’s outdoor terraces offer an ambience just as intimate and private.

Urban Garden, (02) 777-2254, an Italian place located in the scenic Jeong-dong neighborhood in central Seoul, is characterized by a gorgeous garden of trees, a pond, edible herbs and a kitchen garden full of fresh lettuce, tomatoes and green peppers.

But the restaurant’s high point, literally, is its rooftop terrace. It feels like the backyard of a cottage in the countryside. This spot is rented out for rooftop barbecues every evening, and it is fully geared with everything you need: There are parasols, picnic benches and a portable swing for children to play on while they wait for their meals. 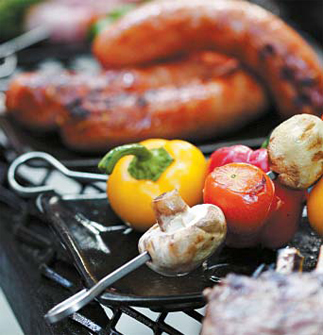 The terrace overlooks the red brick walls of the historic neighborhood, the former grounds of foreign embassies and social clubs from the turn of the century.

You can barbecue your food in one of two ways here. You can have it grilled by the restaurant’s chef over chopped oak downstairs and get it served to your rooftop table. Or you could do it the classic way: Reserve a portable grill, don an apron and do it yourself.

The barbecue seasoning is done right here. The chicken garnished with rosemary is delightfully simple, and the pork is marinated in resin wine. When you order a barbecue combination (50,000 won, or $48.10, for two) it comes with roasted garlic, pineapple, sausages and mushroom with chicken, prawns and beef steak. Other course meals include “Ivy,” a set of pork and chicken (20,000 won); “Lavender” a choice of sirloin steak or mero fish (30,000 won) and “Maple,” a choice of steak, prawns or lamb (40,000 won), which all come with fresh bread and salad.

If you want to avoid heavy-duty grilling and smoke in the yard, a Spanish-styled barbecue at La Plancha, (02) 790-0063, in Itaewon offers a set menu free of hassle. It serves marinated meats, homemade sausages and seafood grilled on the restaurant’s oak charcoal. The menu starts from 46,000 won including a chicken leg, skewered pork, sausages and sirloin steak with your choice of garnish and sauce. The barbecue is served in the styles of Southern France and Spain, and the food is served on wooden cutting boards.

Swiss, (02) 394-5003, located on a hill in Pyeongchang-dong, central Seoul, was originally a steak joint, but now offers a homemade-style barbecue throughout summer, rendered against a beautiful mountain backdrop. The rooftop has everything you need for barbecue parties. The set (30,000 won per person) includes chicken, seafood, corn and vegetables. Reservations are necessary.

The cheapest and most common way to enjoy an outdoor barbecue in Seoul is to visit Nanji Island, (02) 304-0061, a camping site near Seoul World Cup Stadium. It was built in 2002 to cater to visitors to the Korea-Japan World Cup and it has full camping facilities, including lanterns and barbecue grills. You can rent this equipment for 6,000 won to 25,000 won.

A camping ground inside Seoul Grand Park, (02) 500-7870, in Gwacheon, southern Seoul is less well known, but offers clean facilities in the middle of a forest.

One setback: This is not an auto-camping site. To get to the facility, you have to walk up a slope for about 800 meters, and parking is virtually impossible if you visit later than 9:30 a.m. Grills are rented out at a convenience store inside the camping ground. Admission is 2,000 won.

For a more luxurious barbecue experience, visit a clubhouse run by the Jamsil Yacht Club, (02) 424-5256, in Ttukseom overlooking the Han River, in eastern Seoul.

The clubhouse was originally a warehouse and an office for a windsurfing shop, but it now serves as a pension house in the summer.

It’s got a deck with a large barbecue grill, a tent, full kitchen facilities and an air-conditioned room upstairs for overnight stays.

You can rent the clubhouse for 100,000 won for two hours, and there’s a package deal that includes a yachting trip on the Han River and a barbecue.

To Sept. 30: The Grand Hyatt Seoul is holding a poolside barbeque buffet. The menu includes meat and seafood grilled on a large charcoal grill with fresh salad and desserts. The barbeque is open from 6 to 10 p.m. The buffet costs 56,000 won ($53.87) excluding tax.

To Sept. 30: This is the only hotel in Gangnam, southern Seoul, with an outdoor swimming pool.

To Sept.30: The Vendome Garden is open at the Renaissance Seoul Hotel for unlimited refills of beer and different selections of food during the week. The barbecue costs 33,000 won and 12,000 won for drink platters.

To Aug. 31: River Park pool-side buffet offers over 50 different food platters. On July 12 and 13 there will poolside concert featuring Korean celebrities such as M.C. Mong and Eom Jeong-hwa. The buffet costs 60,000 won, including access to the swimming pool.

To Oct. 31: Ritz Carlton Seoul Hotel presents live music on the terrace. Two different course menus are on offer; an 85,000 won menu including champagne and an assorted barbecue. Call (02) 3451-8000

To Sept. 28: The Parkview Terrace is open on Saturdays and Sundays from 7 to 9 p.m. The barbecue costs 53,000 won for adults including champagne.