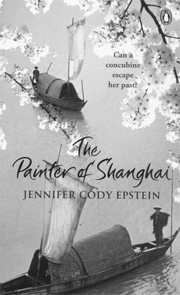 The Painter of Shanghai

Fourteen-year-old Yuliang is orphaned at a young age and sent to stay with her opium-addled uncle.

Finding himself in a delicate financial situation, the poetry-quoting drug-addict sells all the family furniture.

Still broke, he whisks his niece to the big city where he promises her work and the chance to earn lots of money.

Yuliang thinks she is going to take up professional embroidery like her mother, but instead she is sold into a brothel called The Hall of Eternal Splendor.

The girl spends the next few years in servitude, rising to become the top “flower” after the last one is found murdered in a gutter.

Pan is drawn to the vulnerable but self-possessed Yuliang, especially her ability to recite the work of Li Qingzhao, an acclaimed female poet in China who lived 1,000 years ago.

Despite her talent, Yuliang struggles with the classes. She simply cannot get a handle on nudes. She fails to see the beauty of a person in the flesh, which is hardly surprising. As a child sex slave, her customers saw her nudity in terms of lust, and Yuliang calculated them purely in cash terms.

Her breakthrough is when she starts to see the body not as an object for sex or something to trade but as a person.

She does so well she wins a scholarship from Shanghai’s Art Academy to go study in Paris.

In France, her talent blossoms but she becomes impoverished when Pan reduces the monthly stipend he sends her from China. (He’s still in China with wife No. 1.)

She struggles on despite the hunger and immerses herself in the Western canon of classical art in which nudity is far more prevalent than in classical Chinese painting. She finds her voice (her touch?) and paints little else except naked people.

She eventually returns to Shanghai, and as China teeters on the brink of war in the 1930s, one of her exhibitions is destroyed by conservative forces who see her nudes as a threat.

“Our audience is one under foreign attack,” says the curator of the exhibition, who was probably part of the plot to wreck the exhibition.

“Not just its borders, but its very culture. Its way of life. It seems to me that our job now, as artists, is to make them feel safe.”

The irony is that the men who were her customers and hungered for her body were the authorities that labeled her work obscene and used her background as a former prostitute to denigrate her and her art.

As Japan readies itself to attack Shanghai, Yuliang decides to return to France where she died in the late 1970s in relative obscurity.

Jennifer Cody Epstein’s enthralling debut novel, “The Painter of Shanghai,” which she researched during a Master of Fine Arts in the United States, is a work of historical fiction based on the real life of the Chinese painter Pan Yuliang.

Film buffs might recognize the plot from the 1994 movie “Hua Hun (A Soul Haunted by Painting),” which starred Gong Li as Yuliang.

The quote prefacing the book is telling: “Though a living cannot be made at art, art makes life worth living.” That pretty much sums up Yuliang in this engrossing tale full of wise poetry and centered around an incredible artist. Yet I can’t help feeling sorry for her courageous husband Pan who gave up so much for Yuliang and asked for nothing in return.

Yuliang could never return his love for her art was all-consuming which makes Pan’s tale as sad as hers.