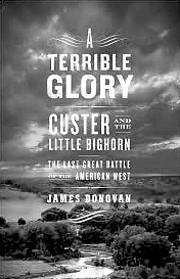 When one imagines the last stand of General George A. Custer and the Seventh Cavalry against an overwhelming force of Native American tribes, it’s easy to think of a glorified battle from a western.

But the account in “A Terrible Glory: Custer and the Little Bighorn the Last Great Battle of the American West” by James Donovan is probably more historically accurate.

The book relates Custer’s military career from the American Civil War to the final hours of his famous last stand at the Battle of the Little Bighorn in 1876 where he died.

This breadth gives readers a clearer understanding of Custer and the context for the military decisions he made.

The author describes the state of the U.S. military after the Civil War and the politics involved and provides a picture of the military leadership at the time, all essential ingredients that shape up the background to the military disaster.

What I found interesting was the depiction of the cavalrymen. You get the idea that the Seventh Cavalry was nothing more than a ragtag band, clad in uniform and given a rifle to hunt down the enemy. The Hollywood image is far cleaner in comparison.

“Payday on a post was usually the scene of unbridled drunkenness, with virtually every trooper not on duty thoroughly inebriated and penniless in no time,” writes Donovan.

Another interesting anecdote comes from U.S. cavalryman Sergeant John Ryan. “Individually the Indians were better soldiers than our troops, for every Indian was a perfect rider and a good soldier. The regular army was composed mostly of green recruits and so unreliable that even Custer did not dare let them fight mounted on some occasions and had to turn his men into mounted infantry.”

Leading such troops was the flamboyant Custer, who is best summed up with the following quote before a charge on a Native American village. “He yelled, ‘Boys, hold your horses ? there are plenty of them down there for us all.’”

One drawback of the book is that the story is told more from an American perspective. While research material must have been abundant on the U.S. side, little written documentation covers the Native Americans’ side, except for oral narratives passed down through the generations.

For the lay reader, a battle between a small force and an overwhelming one is a no-brainer in terms of outcome. Nevertheless, apart from underestimating the size of his enemy, Custer’s decision to split his forces and the lack of communication between each unit led the Seventh Cavalry to its fate 132 years ago on a hill above a winding river called the Little Bighorn.

One learns that Custer, despite his experience fighting Native American tribes, made strategic and tactical mistakes that led to his death and the annihilation of 210 men under his command.

The book vividly portrays Custer’s final hours. “On the flat crest at the far end of the ridge lay Custer, naked, leaning in half-sitting position against two soldiers beneath him. Under his body and around him were about twenty cartridge shells, at least some of them brass casings from his Remington sporting rifle. An arrow had been stuck into his penis.”

Donovan tries to cast a revisionist light on Custer’s military blunder. He acknowledges that splitting his command was Custer’s gravest blunder, but he says, “These errors were not, ironically, those he was accused of.”

Donovan adds, “The complexities of the campaign were subsumed under a simpler message; blame the dead Custer, whose reputation for sudden charges conveniently dovetailed with the official story.”

This book is well researched and suitable reading for military history buffs and readers interested in one of the greatest defeats in post Civil War U.S history.