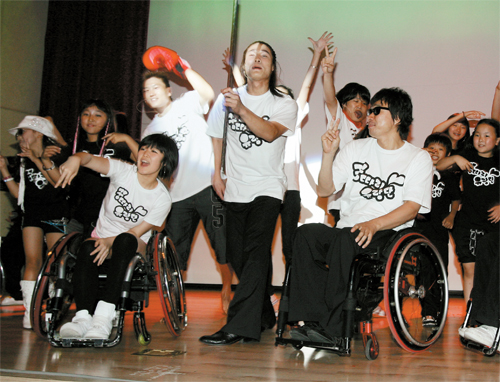 Former pop star Gang Won-rae (pictured right in the wheelchair) was paralyzed from the waist down in a traffic accident in 2000. His true story forms the basis of the Ggungttari show.

A troupe of physically challenged actors and entertainers are running a series of performances for juvenile delinquents on probation or parole.

The troupe is called Ggungttari and comprises the visually impaired, amputees and paraplegics. It staged its first production before 200 teenagers and their guardians at the Seoul Probation and Parole Facilities in Huigyeong-dong, Dongdaemun District, last Saturday.

Ggungttari will stage nine other shows at juvenile halls this month.

“We’ll be performing to 2,500 young people all told and we hope they take something away from our shows,” said Jeong Hyeon-ju from the Probation and Parole Division of the Justice Ministry, who helped launch the program.

“The kids [in the audience] are emotionally scarred and closed off,” Jeong said. “Considering how introverted and passive they all are, we’re satisfied with the inaugural show.” 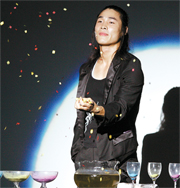 Gang Won-rae leads the troupe, and he hopes his story, which provides the main plot to the drama that Ggungttari performs, will inspire young people who have experienced emotional difficulties.

A motorcycle accident in 2000 left Gang, one half of the Korean dance music duo Clon, paralyzed from the waist down.

Clon was a popular band in the 1990s, and Ggungttari was the name of one of Clon’s hit songs. It is also an onomatopoeic word for joy.

The production that Ggungttari performs at the correctional facilities begins with a somber monologue delivered by Gang. 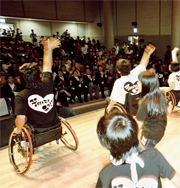 Performers from the Ggungttari troupe on stage. By Ahn Yoon-soo

“Having to live the rest of my life in this wheelchair ... I lost the will to live,” he intones, as the audience watches video clips of his painful experience, from the accident to his eventual rehabilitation.

“But I had family, friends and fans rooting for me. They helped me get back on my feet,” he says.

The show unfolds as Gang, playing himself, holds auditions for a theater group for actors with disabilities. People auditioning, all of whom have some kind of physical or mobility difficulty, take to the stage and perform their acts.

Despite the high-energy performance, the 200 teenagers seated with their guardians in the audience, showed little interest in the show. This was hardly surprising, considering that they had been forced to attend. As part of their probation or parole deal, they have to attend lectures, carry out social work or remain under house arrest as part of the programs run by the Probation and Parole Facilities. 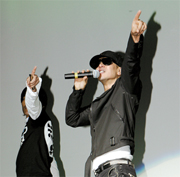 Gu Jun-yeop, the other half of Clon, performs for Ggungttari.

“I knew change wouldn’t come instantly,” Gang later told the JoongAng Daily. “I was a troubled kid myself.” He said he identifies with the parolees and probationers.

“I know what’s going on in their heads. I know what interests them. I just hope we can cause a small ripple deep in their hearts and give them the hope and confidence they need to lead a moral and constructive life from now on,” he said.

And that’s why the troupe is involved in the project for the long haul, he added.

Gang has been doing probation and parole work since 2005, giving speeches and consultations. He said although some kids paid little or no attention during their correction programs, they are often intrigued by the sight of the former dance star in a wheelchair. 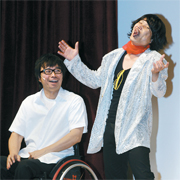 Gi Yong-ju, 40, who lost his sight eight years ago from diabetes, directs the Ggungttari troupe.

Gi also has a kidney disorder, but neither his blindness nor his kidney problems get in the way of staging the show, he said.

The number of juvenile delinquents in the nation’s probation and parole system has risen sharply since Korea set up the Probation and Parole Facilities in July 1989.

There are currently 37 probation and parole facilities and branches across the country, running a range of programs geared toward education and socialization.

Park Sun-gap, a 44-year-old father, sat watching the Ggungttari show with his 17-year-old son. “[My son] won’t admit it, but I’m just hoping he has realized something deep inside,” Park said. A law court recently ordered his son to participate in a six-month program.

“He was just hanging with the wrong crowd,” Park said. “He got into a lot fights.”

His father tried to be positive. “There’s a message in the Ggungttari show and I think [my son] got it,” he said.

Asked what he liked about the performance, Park’s son said, “Everything.” With a nudge from his father to be more specific, he added, “The magic show was fun.”

Magician Jo Seong-jin lost his right hand in 2004, less than a year after he began learning his craft. A trick went wrong and the explosion took off his hand.

“For more than a year, I didn’t care about anything. I gained 18 kilograms [39.68 pounds],” Jo said. “I thought about how I used to make fun of the handicapped when I was young. I wondered if I was paying for my sinful past.

“About a year after the accident, I decided to get back into magic. I won at the Busan International Magic Festival in August 2006, something I wasn’t able to do with both hands,” Jo laughed.

Associating with juvenile delinquents isn’t easy for the performers in Ggungttari. Sim Bo-jun has a facial disfigurement and people have made fun of him all his life. An aspiring singer, the 24-year-old Sim won third prize at a singing contest for people with disabilities in April.

“I hesitated about joining the [Ggungttari] troupe,” Sim said. “I remembered the school kids who looked at me like I was a monster. They would beat me, put dirt in my food, tear my school uniform, all because of my looks.”

Yoo Jae-bong, the director of the the Arts Council of Korea, which funds Ggungttari, said the council would have to decide at the end of the year whether or not to continue.

“But [Ggungttari] has really strong goals and prospects. It reaches out to the isolated with the language of performing arts,” Yoo said.