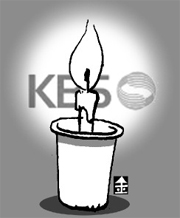 The weeks-long candlelight rallies have directed their message to the government’s media policy. This movement began when demonstrators stood outside the offices of KBS on June 11 and shouted that they would staunchly defend the public broadcasting company. A few days later, conservative groups shouted for the resignation of the company’s president, Jung Yun-joo.

At the start of this summer, Korean broadcasting companies were thrown into political turmoil. “PD Notebook,” MBC’s program that broadcast a documentary on mad cow disease, and whether Jung stays in his job have become hot political issues. Media unions and associations are complaining about the government’s media policies, and the conflict is unlikely to subside soon. A Grand National Party lawmaker lent weight to the claim that media policies will become a source of conflict between the conservatives and liberals.

A prime example is the attempt to oust Jung. According to the media unions, the previous administration appointed him because of shared ideological beliefs, and the current government is trying to replace key broadcasting posts with like-minded people.

In the midst of all this, the KBS labor union that has been working to oust Jung has suggested a plan whereby a politically independent person is appointed as KBS president. It is a measure by which the current KBS council, members of the general public and representatives of KBS employees recommend a candidate, and has him or her vetted independently.

This would prevent a new president getting appointed every time the government changes.

However, we must look into what we mean by “politically independent.” It means a person who is not tied to a party. It does not mean being free from politics. In any case, it is almost impossible to be completely independent.

This is especially true of a leader elected with the support of political groups. It is more important to mediate between other groups’ interests than satisfying the political interests of his or her support forces.

If this is the case, how about saying that the candlelight rallies were political from the beginning and it is just that the political context has changed.