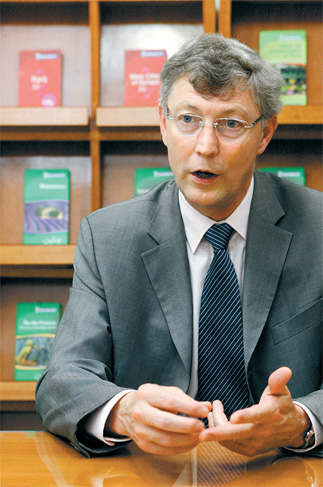 In the animated film “Ratatouille” (2007), a young rat named Remy dreams of becoming a great chef. But there is one character standing in the way Anton Ego, the humorless and demanding food critic.

His reviews can make or break a restaurant. A rumor even circulated that after Ego downgraded a restaurant from five to four stars, its chef mysteriously died.

Although fictional, this animated depiction of chefs and critics isn’t far from reality, though Christian Delhaye, the president of Michelin Maps and Guides, the restaurant and hotel guide publisher, suggests a different image of his company’s food critics.

“Critics are usually viewed as people in their 50s with a potbelly, who wear grey suits to avoid being noticed by restaurant owners,” he said.

At Michelin, however, critics span the spectrum of gender, age and race. They also don’t visit the restaurant alone, like the formidable Ego, but prefer to go with friends and families. They try to have as natural a dining experience as possible.

“Those [critics] who note down everything they eat on a piece of paper are definitely not part of us,” Delhaye, 55, said, during his recent visit to Korea, last month.

Even so, many restaurants, according to Delhaye, revere and fear the reviews published by the Michelin guide, just like Remy in Ratatouille.

“The restaurants’ reputation and business prospects are impacted for better or worse by the stars given by us,” the director said. To some gourmet lovers, the guide is the cuisine bible.

Michelin Maps and Guides is part of the Michelin group, a global tire maker. It publishes the “Michelin Red Guide,” an international hotel and restaurant guide, which awards stars to restaurants. So far, there are restaurant guides for 12 cities that include some 45,000 hotels and restaurants, mainly in European cities like Paris and London, as well as New York, San Francisco, Los Angeles and Tokyo.

Delhaye was on his way back to Paris after an event in Beijing to celebrate the guide’s Chinese language edition. While in Asia, Delhaye said he was searching for the next Asian city, after Tokyo, to be selected for Michelin guide reviews.

“Seoul is one of the potential cities,” he said.

It was Delhaye’s first visit to Seoul. During the trip, he visited the Ministry of Culture, Sports and Tourism and gave an overseas phone interview with a French radio station.

The “Michelin Guide 2008 Tokyo” was published last November. It was the talk of the town all over Asia, though criticism has surfaced that the reviewers gave away stars too generously.

Some 150 restaurants in Tokyo were reviewed 191 stars in total were given. Among them, eight restaurants received the highest rating of three stars. In comparison, there are just three restaurants with three stars in London and one in New York.

But Delhaye is quick to defend the first Tokyo guide.

“Considering that there are over 16,000 restaurants in Tokyo alone, the ratio [of three-star restaurants] is appropriate,” he said.

Some in the Western media have claimed that reviewers were influenced by commercial pressure to increase publicity of the book in Tokyo, which Delhaye refutes.

“There isn’t a reason to award more stars just because we want to increase sales by selling more books,” he said.

“Sixty percent of the restaurant listings are local [Japanese] restaurants,” he said. “The evaluating team consisted of many Japanese.”

According to Delhaye, Michelin doesn’t publish guides in cities that the reviewers aren’t familiar with.

The company started business 20 years ago in Japan and currently has more than 1,000 employees.

Michelin Maps and Guides have five evaluation principles: All inspection is done anonymously, they refuse sponsors, they update information every year, they regularly visit the restaurants and the same rules are applied to all restaurants.

The stars are awarded according to taste, quality of ingredients, creativity and price. The taste should be consistent, which means a critic regularly visits the restaurant for taste control.

The reviewers dispatched to different cities are kept secret. The only information given is that there are 86 reviewers in total.

“Reviewers are all experts with experience in hotels and restaurants,” says Delhaye. “Most importantly, they’re very passionate.”

A critic visits almost 250 restaurants a year. Without passion, it is mission impossible reviewers get bored otherwise, Delhaye says.

Critics at Michelin are selected every year. They go through several interviews at various restaurants. Several hundred applicants apply to join the secret group.

Some criticize the financing all members work full-time, on monthly salaries and are paid travel expenses. Their restaurant receipts are reimbursed.

Though the money spent on each critic differs according to local commodities, a yearly average of 160 million won ($152,640) is spent per person. The expense isn’t an issue to Michelin, however.

“What’s most important is how much of a qualified investigation and updated news is done on each dish,” the director said.

The company’s next guide book location is being kept a secret.

Delhaye even declined to answer which restaurants he visited during his visit to Korea, though later on, an acquaintance who joined the director for dinner that evening said they went to a traditional royal cuisine restaurant in Gahoedong, northern Seoul.

“I could be misled,” he said. “Neither Jean-Luc Naret, the editor of the guide book nor I, evaluate and select restaurants it’s up to each member of the critics’ team.”