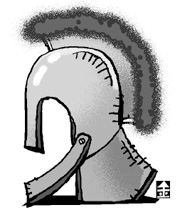 Publius Valerius Publicola was a Roman consul in 509 BC. A wealthy man, he was renowned as the strongest fighter of his time.

Like President Lee Myung-bak, he also nearly lost his authority before 100 days had passed since he came to power. Valerius’ troubles began from day one when he was received by a triumphal celebration as he swept in aboard a horse-drawn carriage, a procession usually reserved for kings. His house on a hill, which seemed more like a palace, was considered an eyesore by the Roman people. The citizens said, “Valerius is trying to overthrow the Republic and ascend the throne as king.”

They gathered in a valley and staged a protest against him. Valerius watched the scene from his palatial residence on the hill.

Our president stared at the candles from the Blue House. However, their similarities end at this point.

On hearing the public criticism, Valerius made no excuses. He immediately had his luxurious house demolished and moved to a humble house in a swamp. Also, he kept his door open at all times.

Valerius overhauled his cabinet. He legislated an act stipulating that any person could be elected as consul and appointed many commoners to high posts.

However, Valerius still thought this was not enough, so he donated all his wealth to public road and sewerage projects.

At this juncture, we wonder what has suddenly happened to President Lee’s pledge to donate all of his property.

Eventually, the Roman people changed their minds. Valerius led an infantry battalion consisting of commoners and won numerous victories in different wars. He was elected consul five times. When he died, unable to pay for his own funeral expenses, Roman citizens collected money to hold his funeral. There was deep mourning and a shared sense of loss for a period of one year.

He played a pivotal role in taking republicans to a higher plane and received the honor of being titled Publicola, meaning “friend of the people.” His family was held in high esteem for nearly 2,000 years, until the fall of the Eastern Roman Empire.

We hope that the story of the Lee Myung-bak administration will come to a happy ending. If President Lee really wants to quell the negative public sentiment, it is necessary that he make sacrifices that leave a deep and lasting impression on the people. However, there are no visible signs of any such thing occurring. It seems that modern-day Korea cannot beat ancient Rome.