Quiz changes nothing about lowbrow gags

Quiz changes nothing about lowbrow gags 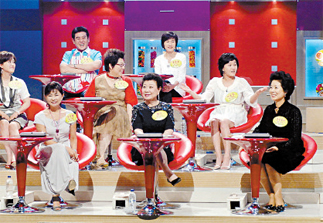 A group of middle-aged women celebrities in “The Quiz That Changes the World.” [MBC-TV]

Knowing the difference between a balcony and a veranda is one way to change the world, according to an MBC-TV entertainment show.
Plus, if you can tell a mackerel from a mackerel pike, you have more potential to serve the grand cause of changing the world.
Well, I was wearing the same frown as yours when I was watching “The Quiz That Changes the World,” a segment of “Sunday, Sunday Night,” one of the most popular entertainment shows currently on a major TV network.
First, I was hooked by the ambitious title of the segment, and decided to invest 70 precious minutes of my short lifetime.
After the show ended, however, the title of the show remained at odds with what I saw.
The show’s premise is that a housewife is the heart of a household, and the power of a housewife can change the world.
The show brings about 20 celebrities, mostly middle-aged and married women — who are called ajumma in Korea — and let them solve quiz questions.
The quizzes are related to housekeeping, such as how to tell a mackerel from a mackerel pike, and other bits and pieces of common sense about daily life.
One thing that these celebrities share is that they come with voluble tongues and their conversation makes the show a cross between a quiz show and a talk show. The thing is, though, the show turns these ajumma celebrities into a laughingstock rather than revealing them as the “heart of household with a power to change the world.”
I mean, watching an aging actress crying out “A balcony is a place for a princess and a veranda is for drying laundry” and another middle-aged singer shouting “A balcony is a place for high heels and a veranda is for slippers” was nothing but silly comedy.
In earlier episodes, the show featured sports stars fighting over the price of vegetables at a supermarket. To get a chance to solve a question, the ajumma have to raise a rice spoon, which adds another element to the comedy.
The highlight of the show is a housewife pentathlon, where the three finalists compete in games like peeling garlic, picking up peas with a pair of chopsticks, massaging their husbands’ faces with slices of cucumber and threading a needle.
Of course, the job of a housewife is truly valuable and formidable, which is a lesson I learned after moving out of my parent’s house.
However, this housewife pentathlon does not seem to have anything to do with the value of housekeeping. Instead, it makes fun of housewives rather than encouraging them to “change the world” as in the title.
So those women’s respected careers have fallen into the category of ajumma, a diehard pejorative for middle-aged women who are aggressive, thick-skinned and unsophisticated.
By making fun of them, the show was more of a reflection of the disdain people have for ajumma.
In addition, the show walks a fine line between honesty and vulgarity, as the middle-aged women do not hesitate to rely on the ajumma stereotype of innuendo, sexual gags that are not fit for this family newspaper.
A mild example was a middle-aged actress telling a male guest who was about to tie the knot to “just stay in the hotel during the honeymoon” and “to take showers together with the bride.”
These comments are not only unnecessary but also out of context. But the celebrities, egged on by the show’s setting, get hyper and let forth a spree of improper words under the protection of the ajumma image on a family time slot on Sunday.
What comes first is the pressure to make viewers laugh, and, as a result, what remains is nothing but a bitter aftertaste.
In my humble opinion, this quiz show should change itself before it bothers to change the world.