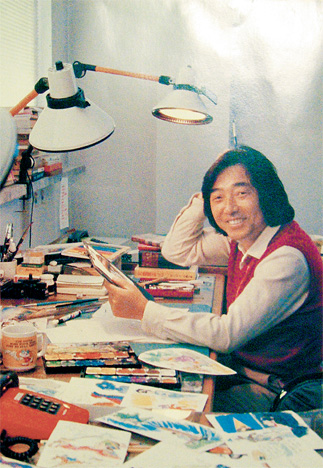 Artist Ko in his studio in the 1980s. Provided by the organizer

Many mourned when cartoonist Ko Woo-young passed away three years ago at the age of 67.

His works, however, remain in many people’s hearts.

The Arco Art Center in Daehangno, central Seoul, is holding a retrospective on the works of Ko, a representative comic artist of 1970s and 1980s Korea. “Ko Woo-young Comics: Never Ending Story,” opens next Wednesday.

“His works still have so much to reveal,” said Kwon Jin, the center’s communications manager.

The retrospective displays original works preserved by the family.

“Visitors are welcome to enjoy a wide range of genres ? paintings, sculptures, videos and installations ? that all relate to Ko’s comics,” Kwon said. “The late Ko’s works related to popular culture three decades ago and even today.” 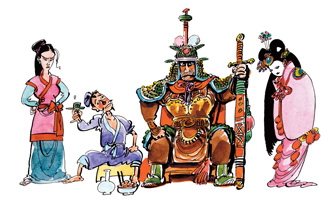 Ko made his debut in 1953 with his 16-paged “Jwidori” (jwi means mouse in Korean), a Korean version of Disney’s Mickey Mouse.

He was the first to serialize a newspaper comic, “Imkukjung,” in Sports Daily in 1972, which increased the number of copies published.

The final episode of Suhoji was published in 2003. He started the comic in the early 1970s but publication was interrupted at times because the military regime had prohibited publishing and he had poor health.

On the second floor of Arko Art Center, there is a lounge where visitors can read Ko’s classic comics.