Administration wants to put a new spin on history textbooks

Administration wants to put a new spin on history textbooks 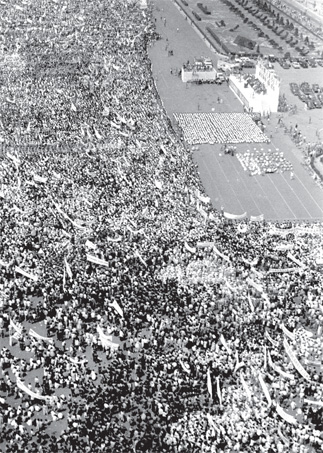 Anti-communist rallies were common in the 1970s and early 80s. [JoongAng Ilbo]

After more than half a century since the Korean War (1950-1953) ended in an armistice, Cold War ideology is still very much a part of South Korean society, or at least with the older generation.

If anybody had forgotten, remarks by Education Minister Kim Do-yeon, made last week at a cabinet meeting were a reminder of just that.

“It seems that due to a biased history education, teenagers harbor anti-U.S. and anti-market economy feelings,” said the minister, who was replaced earlier this week but not because he made such remarks.

Kim lamented that teenagers are unaware of how the country achieved its rapid rise to an industrialized and full-fledged democratic nation. Prime Minister Han Seung-soo gave the minister a helping hand, underlining that some of the current textbooks have to be fixed, as they have gotten old and “times have changed.” He made clear that such a process would not be left to the expertise of academics alone but would involve a strong government dosage. 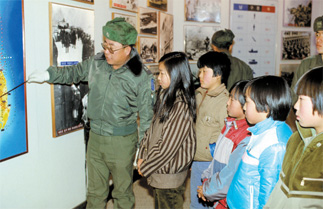 “Rather than leaving the matter to scholars, each government department should summarize the wrong parts and let the Education Ministry handle it,” Han said.

To no one’s surprise, such remarks drew immediate rebuke from the leftist Democratic Labor Party and the main opposition United Democratic Party. Both parties warned that such a move by the government was nothing but an attempt to groom citizens who are only pro-American and market-friendly.

While months of protests over U.S. beef imports have brought the Lee administration to its knees President Lee has already apologized twice the education minister’s recent remarks accurately reflect the narrow thinking inside the closed ranks of the administration when it comes to searching for the reasons behind the current state of affairs. 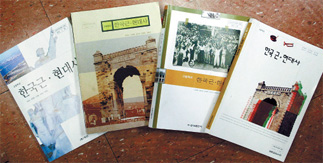 History textbooks are revised periodically while corrections are made every year. [JoongAng Ilbo]

“The fact that senior ministry officials have mentioned the modification of textbooks reveals just what the conservative leadership is thinking,” said Kim Hyeon-jong, a professor of history at the Korea National University of Education. “They really think the problem has to be fixed at the grassroots level of education.” Without doubt, the administration has toyed with the idea for a long time. Before President Lee officially took power in February this year, an ad hoc committee overseeing the transfer of government recommended to President Lee in January to inject the education curriculum with a more conservative view.

For conservatives, such a school of thought may not be that farfetched. Last week, the liberal Korean Teachers and Education Workers’ Union announced that banners opposing the administration’s decision to open the Korean market to U.S. beef would be displayed at schools. The formation of the union in 1989 clearly marked a change in the educational system as teachers began to make their voices heard on various social issues, and made it their business to influence education by directly infusing such teachings into the classrooms. 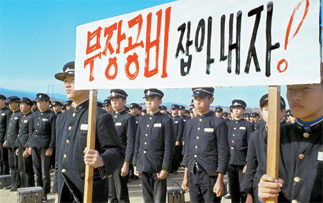 In the aftermath of the Korean War, ideology played an essential part in the country’s educational system. Middle school and high school students often were part of anti-communist rallies organized by schools. [Joongang Ilbo]

Nevertheless, some government officials who were asked, know that under the current political climate any premature move to modify textbooks could ignite more public outcries, similar to the ongoing protests that have paralyzed the Lee administration for the past two months.

A cautious Blue House official speaking on condition of anonymity said that the idea to modify textbooks has been raised but that everything was still in the preliminary stages. “There was some talk, but that’s what it was, just talk. It’s not like there is a concrete plan to bring about changes on such and such dates,” said the official. “If it happens there will be public hearings and experts from all corners will be consulted.”

In the cabinet meeting, Kim, who has since been replaced as education minister, said that modifying textbooks would require about two years, which would coincide with a scheduled general overhaul and modification of history textbooks for high school freshmen and first-year middle school students. In a general overhaul, study subjects could be added or omitted from the curriculum. When making his case, ex-Minister Kim compared the treatment given in textbooks to a social movement in the South initiated by the late President Park Chung Hee and one in the North; he said some textbooks disparage the South’s movement while giving credit to the North Korean one. He also pointed out that the description of the South’s movement was relatively short compared to the North Korean one.

Kim Dae-in, an Education Ministry official, said there were no immediate plans to drastically change current history textbooks. But he said that “supplemental material,” such as video clips and other educational materials, are in the making, to be used in the latter half of the year. They are available from the home page of the ministry and will be distributed to schools as well.

While it appears that the government is still weighing how to proceed on the sensitive issue, the wheels are in motion. In June, the Korean Publisher’s Society released a statement arguing that the Education Ministry should stop putting pressure on publishers. The ministry had sent copies of a request made by the Korea Chamber of Commerce and Industry to make corrections to more than 300 expressions in textbooks that the chamber views as prompting anti market-economy and anti-cooperation sentiment.

Washington, thousands of miles away, is not immune from this old ideological battle as its alliance dating back to the Korean War has inevitably put it in a constant balancing act as voices in Seoul become increasingly louder. More than once the United States has witnessed how small incidents have ballooned into widespread anti-U.S. sentiment. The textbook issue could become such a case.

If the anti-government demonstrations sparked by high school teenagers had confirmed the belief among conservatives here that the past decade’s education had brainwashed the young generation with “unhealthy elements,” as one government official put it, a survey conducted last month by the Ministry of Public Administration and Security probably provided the final kicker, prompting the government’s reaction in the cabinet meeting.

Out of 1,016 middle school and high school students, only 48.7 percent knew that the Korean War was started by a North Korean invasion, while only 43. 2 percent could correctly tell what year it started. When asked which country posed the biggest security threat to Korea, the United States was named by 28.4 percent of the students. But South Korea’s long-time ally was also cited by 34.6 percent of the students as the essential partner for cooperation to provide security to the Korean Peninsula. Sixty-four percent answered that there was a low probability that North Korea would provoke another war.

As a result of the survey, the ministry concluded that more emphasis should be placed on anbogyoyuk meaning, education regarding the country’s security that would encompass education on North Korea’s threat, something the previous administration took a different approach to. Since the 2004 edition of the official Defense White Paper, the Roh administration erased the expression “main enemy” that had been in use to describe the North.

Some scholars argue that the Lee administration is assigning blame for the current political situation on the educational system rather than its own shortcomings.

“That’s a very old idea in play when the military had ruled the country. I am surprised that such ideas are still around,” said Cheon Hui-wan, an official of the Korean Teachers and Education Workers’ Union. “I hope that current academia will not kowtow to such ideas.”

In the past, when the country tried to raise itself from the ashes of the Korean War, emphasis was placed on internal stability and rigid anti-communism. Thus, government propaganda and education were conducted under a Cold War prism while the public, trying to make a living, just went along. It certainly helped when the occasional spy or commando from North Korea was caught. But at times, Seoul had fabricated its own North Korean spies when it deemed fit.

The Presidential Truth Commission on Suspicious Deaths had ruled earlier that the government at the time had fabricated an incident in which it accused a specific group of civic leaders and students as trying to take over the country on orders from Pyongyang by instigating student demonstrations. At such times, writing and drawing contests bashing the North were held regularly. So were speech contests.

Now, with Korea the world’s 12th largest economy, such schemes have long disappeared while many South Koreans, especially the younger generation, view the North more as a poor brother needing a helping hand, rather than a threat.

Apart from the zeitgeist, what had changed attitudes towards the North is not necessarily the result of years of liberal education but the fact that modern history “does not sell,” experts say.

Here, high school students have a choice when they are in their senior year, to select certain subjects they want to take on as exam subjects for their college entrance exams.

“Many students find modern history boring and they think it’s harder to study then other subjects. So they opt for other subjects such as geology,” said Jo Chung-cheon, a history teacher at Youngdong High School.

“It’s a widespread phenomenon nationwide.” According to the Education Ministry, modern history is about the third most popular among elective study subjects.

The lack of interest in ideology-clad education stems also from the simple fact that decades of relatively peaceful coexistence with the North has raised a generation quite insensible to potential threats.

In 2002, North Korea attacked a South Korean naval vessel and the ensuing battle resulted in the death of six sailors. Despite such casualties, most of the nation’s young population was immersed in the World Cup games going on at the time. News of the naval battle was buried under the football frenzy and quickly faded away.

It’s still too early to tell whether the textbook issue will be taken up by opposition parties and civic groups as another issue for candlelight rallies, but if the Lee administration decides to push forward with the modification of history textbooks, observers warn that the potential for another confrontation is high.

“Without question, this issue is like a bomb. If they promote this idea wrong, there is bound to be resistance,” said Ju Jin-oh, a professor of history at Yonsei University.

“It’s a recipe for another disaster.”

Under the current circumstances, time travel maybe the only option for the Lee administration to implement an education policy to their liking.