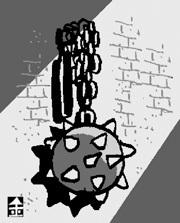 In the old days in Beijing, there was an execution ground located near Tiananmen Square. Before taking their last supper, prisoners who were to be killed washed their hair and face. On that one night, they were allowed to order any food they wished.

On their way from the prison to the execution ground, prisoners would be taken by a tavern. This tavern would offer them a special drink, a mixture of weak and strong liquors similar to Korea’s poktangju, or “boilermakers,” of today. It is said that after drinking the cocktail, the prisoners smiled for some reason. It was a custom to smash the glass after the drink.

It was said that the prisoners were still smiling after they died thanks to this alcoholic cocktail. Meanwhile, the executioner had to wear heavily tinted glasses so they would see less of the cruel scene.

Sima Qian, a famous historian during the Han Dynasty who wrote “Shiji,” or “Records of Great Historians,” was sentenced to castration.

In those days, men who have had their reproductive organs forcibly removed were taken into a room designated for silk farming, and forced to stay there for more than 100 days. Such rooms had no ventilation and were regarded as ideal places to prevent secondary infection.

China had a variety of severe penalties in the old days. Although punishments were harsh and cruel, there was also a touch of humane and thoughtful care in the process of execution, such as offering the whiskey cocktail to condemned prisoners, letting executioners wear sunglasses and allowing prisoners to stay in the silk farming room.

That was not the case, however, in Europe. Prisoners were pushed into a copper mold in the shape a cow. The mold was then heated from below and spectators listened to the person inside scream in unbearable pain.

That’s the history of punishment in the Western world.

A U.S. newspaper reported recently that torture methods used in the U.S. Guantanamo Bay detention camp were the same as those used by the People’s Liberation Army of China during the Korean War. The article emphasized that the torture methods were “made in China.”

But it is doubtful that they had to refer to another country’s textbook to torture prisoners there. They must have had their own methods.

Torture and severe punishment is a legacy from the past in both the East and the West. It is unfortunate that they are still used today as well.