A novel festival for Dickens fans

A novel festival for Dickens fans 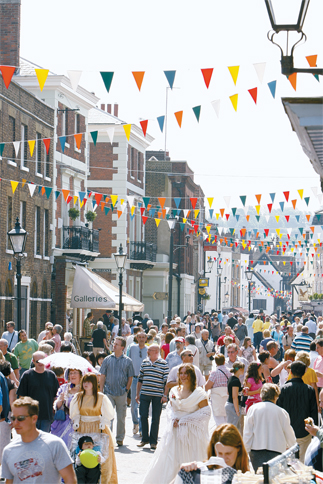 The Dickens Festival attracts thousands of tourists every year. You don’t have to dress up, but it’s part of the fun. Provided by Medway Council

I was settling down to a lunchtime beer on a recent visit back home when Fagin burst through the door to the pub.

A portly Mr. Pickwick, who looked like he’d already had a few sherries that morning, and a kid who was probably meant to be Oliver Twist were close behind.

“A couple of pints of lager and a lemonade for the boy,” said Fagin, reaching into the long pockets of his cloak for some money.

The barman gave a silent nod and reached for some glasses.

Sharing a beer with Fagin, the master pickpocket from “Oliver Twist,” or anyone else from a Charles Dickens’ novel, is not an everyday occurrence.

But it is a yearly one in my hometown of Rochester, about an hour’s train ride southeast of London.

New Orleans has the colorful Mardi Gras. Rio has its carnivals. Dublin has its St. Patrick’s Day festivities.

My hometown? We go loopy once a year for a 19th-century socio-realist novelist.

If you needed proof the English were eccentric, Rochester’s Dickens Festival might swing the case in your favor.

I downed my beer and left Fagin and Mr. Pickwick discussing the England football team’s failure to qualify for Euro ’08 and went to find where the Dickens action was unfolding.

The program of events I picked up in the pub boasted of a “spectacular festival of colorful parades, music, dance, drama and street theater.”

All for a writer born nearly 200 years ago.

Along the High Street, I spotted three Miss Havershams tottering one after the other; one Scrooge, who looked almost indecent in his nightshirt; several mischievous urchins probably belonging to Fagin’s gang; and a sprightly soldier who looked dressed for the Charge of the Light Brigade.

From left to right: A young Miss Haversham takes a break with an ice cream; John Knott, right, the chairman of the Rochester Dickens Fellowship, and John Benson, left, are regulars at the festival; lots of visitors make their own clothes for the event; local thespian Kevin Ford plays the Lamplighter at the festival. By Michael Gibb

Outside the Dickens Cafe was a young woman whose dress looked like it had been sewn together from old curtains.

“I bought the material in a second-hand shop,” she told me. I asked if she was entering any of the costume competitions.

“No, but he is,” she said, pointing to her elegant-looking boyfriend. He was trussed up in a tight waistcoat and top hat.

I don’t know who he was supposed to be and I didn’t like to ask in case I hurt his feelings.

Kathleen and David Hotson were on the same page, so to speak. I met them later in the day. They were sat on a bench by the bank, watching the world go by.

“We come for the dramatic readings of Dickens’ novels,” Kathleen said, whose dress was also made from a pair of old curtains.

Did you read Dickens books? “He’s too wordy for my taste,” admitted David, a semi-retired wine merchant.

To be honest, I’ve never read a book by Dickens. But growing up in Rochester, you can’t avoid him. I’ve already mentioned the Dickens Cafe. There’s also an Indian restaurant called Two Cities, after “A Tale of Two Cities” and a greengrocer’s called Pip’s of Rochester. Pip is the hero of “Great Expectations.”

I used to drink in a pub called Pickwick’s down by the railway station, and Mr. Topes, another Dickens characters, is a popular High Street restaurant.

Every school kid in Rochester knows Dickens spent a chunk of his childhood here (1817-1822). He returned in triumph years later as England’s most celebrated author. Many of his stories draw on local color and setting.

Sometime in the late 1970s, someone in the local council dreamed up the Dickens Festival as a way of drawing in tourists.

The idea might have sounded a bit dry at the time, but the festival is hugely popular. Thirty years later, they turn up in droves.

“I’m afraid we don’t have exact visitor numbers as it’s very hard to measure with a free, open access event of this kind,” Simon Wakeman, the head of marketing at Medway Council said.

But the proof is in the cashier’s till. The High Street shops selling books, antiques and vintage clothes do brisk business at this time of year, and the tea rooms and pubs are usually packed.

Wishing cavalryman good luck in the competition, I trudged up to the Castle Gardens, passing the Royal Victoria and Bull Hotel.

The tangy aroma of hamburgers and hotdogs filled the air, kids were buying balloons and mums and dads were standing around with cans of beer gripped in their fists. They were watching two red-faced men having a go at an arm wrestling match in the courtyard.

Later in the day, there would be a Yard of Ale competition here. This is basically a “one-shot” drinking game, but the shot is very long ? 0.9 meters (1 yard) to be exact. You have to drink as fast as possible without spilling any liquid.

Victorians certainly knew how to have fun ? arm wrestling and drinking games. Who needs StarCraft?

In the Castle Gardens, Alfie Smith’s Traditional Fun Fair was in full swing. I plonked myself on a bench and watched some school kids belt out songs from the musical “Oliver!”

Behind them, a merry-go-round whirled and I began to feel old. This year marked the 30th anniversary of the Dickens Festival and back in 1979 I was one of the kids running around in costume. My sister and I were in a parade and our photo was in the local paper.

To make myself feel less ancient, I contemplated climbing to the top of the castle, built 1,000 years ago by the Normans. But at 34.75 meters (114 feet), the keep is one of the tallest in the country, and I wasn’t feeling too agile after the lunchtime beer.

Instead, I listened to another rendition of “Food, Glorious Food!” by the school kids, sung in eight different keys.

I gazed over the fortified walls that hem in the gardens to the esplanade beside the murky River Medway. Behind the castle keep is the cathedral, also about 1,000 years old.

Both are interesting places to explore ? in Dickensian costume or not ? but I had to track down my wife and eight-month-old daughter who had gone shopping.

We’d arranged to meet at St. Mary’s Meadow, a patch of green beside the cathedral where a conjuror was entertaining kids. My daughter was sat on the grass squealing with delight as Rhia Rhama Rhoos ran through his tricks.

Knott, who is also chairman of the Rochester Dickens Fellowships, said his act was authentic, the same one Dickens used to perform. “I do all my own research.”

I’d planned to see a performance by Gerald Dickens, the great-great grandson, at one of the venues. But my daughter was getting fidgety. Time to go home. Back at the car, a flyer for Dickens World was stuck under the windscreen wiper.

Dickens World is a local theme park, a Disney World for literature lovers.

“Fly across the rooftops of London, through streets and courtyards to the depths of the sewers!” cries the pamphlet.

As I said, if you needed proof the English were eccentric, visit my hometown.

From London, Rochester is 40 minutes by train from Victoria Station or about an hour from Charing Cross Station.

Dickens World is located in the Historic Dockyard Chatham. It’s about 15 minutes from Rochester by car. It’s open all year except for Dec. 25, from 10 a.m. to 6 p.m. For more information, visit www.dickensworld.co.uk.

The Dickens Festival usually takes place toward the end of May and the beginning of June.