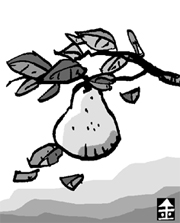 Official statistics in the United States show that 67 million people, about one percent of the world’s population, are classified as refugees who have been forced out of their homes.

Refugees are persons who live outside their country of nationality, in a constant state of stress, anxiety, fear or panic due to political persecution or natural disasters such as earthquakes and cyclones.

Climate change is another culprit behind displacement, not of people, but of animals and plants.

In Europe, the number of mountain birds has been reduced by nearly 20 percent over the past two decades. The number has dropped by as much as three-quarters in the United Kingdom. This is because as temperatures rise, the number of natural habitats has been shrinking.

Plants are no exception. The natural boundary which divided plants in the U.S. was reported to have moved 300 kilometers (186 miles) northward compared to the past. This means that animal species which live in warmer climates are able to migrate further northward as well.

European winemakers have been scouring mountains in search of cool places. Growing grapes in traditional farming areas has become more difficult due to warmer temperatures.

According to research conducted by French experts comparing growth altitudes of 171 plant species in the mountainous areas of Western Europe, it was confirmed that they have relocated upward an average of 29 meters per decade because of global warming.

Researchers at Texas Tech predicted that out of 5,500 species of native plants in California, two-thirds will experience an 80 percent loss of their current habitats within a hundred years. Additionally, they also predicted that a considerable number of species of native Californian plants will be degraded to the status of “refugee plants,” which migrate in search of better habitats, according to the survey.

The United Nations Intergovernmental Panel on Climate Change reported last year that if increases in temperature exceed 2.5 degrees Celsius (36.5 Fahrenheit), then around 30 percent of plant and animal species are likely to be at increased risk of extinction.

If temperatures rise 2 degrees Celsius across Korea over the next century, current climate zones are predicted to move northward, as much as 550 kilometers. If plants don’t migrate, they will disappear.

If the hot issue of global warming remains unresolved, it will pose a huge threat to humanity.