Pedaling to a healthier future?

Pedaling to a healthier future? 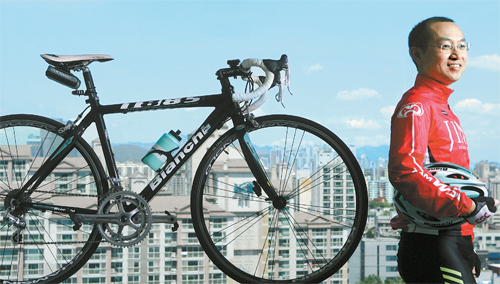 Culture, Sports and Tourism Minister Yu In-chon has jumped into the saddle for his daily commute to the office.[JoongAng Ilbo]


At a time when gas prices are pumping to new heights, Peter Choi, 41, has rediscovered a form of transport that is quick and energy efficient.
The Korean-American has fallen in love with his bicycle.
Choi, resident of Seoul for the past two years, has been commuting to work on his Bianchi 1885 for the past couple of months.
He says it’s been almost 20 years since he last rode a bike. That was at college. Even when living in New York, a city known to be more bicycle-friendly than Seoul, he caught the subway to work.
But his renewed acquaintance with the two-wheeler has given his life a boost, he says.
“When I was going to work by car, I didn’t want to leave the office because of the heavy traffic,” says Choi, chief design officer at Jina, an architectural firm in Seoul.
“But now, I just can’t wait to get outside.”
He cycles from Gwanghwamun, central Seoul, where he lives with his wife and 3-year-old old daughter, to his office near the Seoul Arts Center, southern Seoul.
On the way he passes Gyeongbok Palace, City Hall, Seoul Station, the Samgakji intersection and crosses the Han River to the Express Bus Terminal.
Despite what you might think, the trip takes just as long by bike as it does by car. The 14-kilometer (8.7- mile) ride takes roughly 40 minutes, almost the same time it took in his Samsung SM7.
Since he started his pedal-powered commute in March this year, Choi said he has traveled a total of 1,725 kilometers. On top of that, considering he started riding the bicycle in February, Choi says he’s racked up over 2,000 kilometers
“People think it’s crazy, but it’s doable,” Choi says. After all, he says, cars are also dangerous. He says he’s been in three car accidents in the past two years: two with buses and one with a motorcycle.
His inexperience showed the first morning he unchained his bike and hit the streets. It was 6 a.m. and still dark but Choi hadn’t attached any lights.
To make sure motorists had a chance to see him in the gloom, he stuck a portable flashlight in his back pocket and hoped for the best.
Since then, he has settled into a routine and is quite the expert. As he glides through the city, he strikes up conversations with cab drivers at red lights and signals to bus drivers, who are rarely happy to see a cyclist careening around the roads in the middle of the traffic, Choi says.
“My bicycle has changed everything,” Choi says. He used to detest the pollution and the overcrowded streets. “I felt disconnected.”
But the view from the saddle is more appealing and he has learned to appreciate Seoul much more than if he were still stuck behind the wheel of his car, he says.
“I’ve cycled around Mount Namsan and along Bukak Skyway, which I wouldn’t have done if I were in my car,” Choi says. “I’m an architect and I can appreciate now that this city was built on principles of design that are hundreds of years old and based on a respect for nature and its surroundings.”
Most people here think the capital is full of ugly buildings and heavily polluted, he says.
“The government is spending lots of money trying to turn Seoul into a beautiful city,” Choi says. “But a lot could be improved if more people start riding bicycles.”
The American architect said until recently he wasn’t an avid environmentalist. “The Kyoto protocol, the Ozone layer ? it all sounded abstract to me,” Choi says. “I was the last person to be concerned about the environment.” 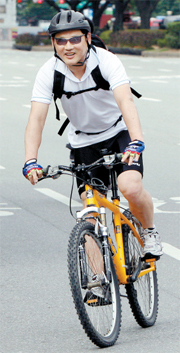 But seeing nature and its beauty, Choi says, has started to take affect on his professional work as well, as he is pushing for greener designs and greater stainability.
“It’s the only way to go,” Choi says, adding that his non-Korean clients are showing great interest in such projects but his Korean ones less so, for the moment.
“It amazes me how people here overwork,” Choi said. “Yet the efficiency is low compared to the time they put in.” If you ride a bike, you have to think about the ration of effort and result, since you will exhaust yourself if you cycle hard but don’t get anywhere.
Choi says his health is also benefiting from his commute. “My blood pressure has gone down from hypertension levels and I’ve lost 5 kilograms,” (11 pounds) he claims.
His love affair with his bicycle almost never happened.
One evening he was bidding for an Italian classic bicycle worth 6 million won ($6,012) that was on bid for 2.3 million won.
“It was a close bid but I lost out in the last 20 seconds,” Choi said.
But his interest was piqued. A few days later he bought a bicycle in Dongdaemun, eastern Seoul.
Choi’s enthusiasm has rubbed off on his colleagues, as some of the executives have started to take bicycles seriously as well.
His firm even started to sponsor an amateur bicycle team, Team JINA. One of its athletes, Kang Ji-yong, won first place in the 2008 Tour de Korea earlier this year.
Although it’s not yet a national phenomenon, cycling is gaining in popularity, cyclists tend to think.
People Commuting by Bicycle, an online group founded in December 2003, has 193,000 registered members. Another community is the Korea Mountain Bike Federation, which claims a membership of 7,000.
Eom Jeong-shik, general director of the Mountain Bike Federation, says the number of people showing an interest in bicycles has undoubtedly surged in recent months.
“Gas prices may be one factor but additionally with living standards improving and as people are more concerned about their personal health, more and more people are looking to bicycles,” Eom says.
Lotte Mart said from June 17 through the end of last month, bicycle sales rose 21 percent on the same period last year.
But while the hype expands, the infrastructure and policy are still lagging, and safety is an issue.
“I wouldn’t want to see my daughter cycling on the roads in Seoul,” Choi says.
According to the National Police Agency, there were 431 accidents involving bicycles in 2001 but in 2007 there were 1,374.
“The Seoul government has been saying that it will make Seoul a bicycle-friendly city but there are no bicycle lanes that lead to City Hall or from City Hall to Gyeongbok Palace or Namdaemun,” Choi says.
Even cycling alongside the Han River where the parks are located can be dangerous, Choi says.
“You get cyclists, inline skaters and joggers all using a lane that’s less than 3 meters wide,” he points out. 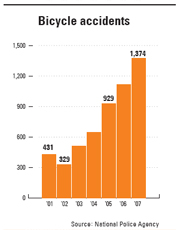 Eom from the mountain bike federation agrees.
“The lanes that are supposed to be for bicycles only are really just for show,” Eom says.
“They don’t really serve their purpose and in many cases they are full of pedestrians or blocked by people selling things or even by the street lights,” he says.
But the really big worry is an accident involving a bicycle since bicycles are labeled as vehicles under the traffic law here. In an accident, there is no distinction between a car and a bicycle in the eyes of the law. If a cyclist hits a pedestrian, it is as if a car was involved.
A cyclist with a driver’s license will be fined the same demerits as if he or she were driving, leading to a possible driving suspension.
If a cyclist hits a pedestrian on the sidewalk, he is liable for a fine up to 20 million won or a five-year prison sentence.
“Many people don’t think of bicycles as vehicles but as a means of transportation,” says Song Sang-cheol, traffic accident investigator at the Yeongdeungpo police station.
Choi says he prefers cycling along the major roads, ones with several lanes. He thinks they are safer than side roads and sidewalks, where pedestrians are prone to suddenly crossing the road, he says.
The government has recently announced that it is taking steps to make the city more bicycle-friendly and promote the use of bicycles.
The Ministry of Public Administration and Security announced on Tuesday that it is organizing a task-force to look into promoting bicycle use.
By the end of this year, the ministry plans to establish measures for promoting bicycles and revise the law in different government departments to make cycling more practical.
According to the ministry, Korea can save more than 500 billion won in energy conservation and environmental benefits if bicycle transportation increases by 1 percent.
“Korea is a sophisticated, multicultural country and it’s about time for this country to change,” Choi says.
“Cycling is about freedom, the environment and nature. It’s about you.”

The right way to ride a bicycle
1. The seat of the bicycle should be at a height so that the legs can be fully extended when pedaling.
2.When pedaling, about one third of the foot should be placed in the middle part of the pedal.
3.When climbing a hill, remember that lower gears help in hill climbing. Although slow, it makes the climbing easier.
4.Braking is usually done by squeezing the levers that are placed on the handle bars. Squeeze them lightly at first, gradually increasing the pressure to get to a full stop. If you squeeze too hard, you might go flying over the handle bars.
5.Don’t forget to stretch your knees before and after each a ride to prevent knee and lower back problems.
[JoongAng Sunday]