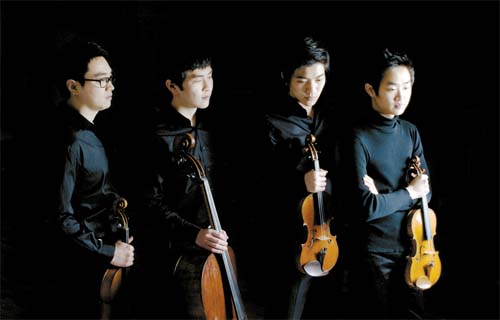 Novus Quartet will perform at the Sejong Center for the Performing Arts on July 25. It won the third prize at the Osaka International Chamber Music Competition in May. Provided by the organizer

Thanks to composers like Mozart, Beethoven, Schubert the string quartet is one of the most prominent ensembles in classical music.

But that doesn’t mean the music is easy to play.

“A string quartet is a tremendously difficult and complex work,” said Kim Jae-yeong, the first violin of Novus Quartet.

“When there are four people with string instruments, it’s all about endurance,” he said.

Kim formed the string quartet with award-winning musicians from the Korea National University of Arts in May 2007 where he is a student.

For Kim, a string quartet is one of the ultimate challenges for a classically trained musician.

“It’s up to the audience to decide whether the final product is a success or not. But when each musician has a good understanding of the pieces, and the teamwork and spirit is at its best, the music by a string quartet usually leaves a powerful impression on the audience,” Kim said.

In May this year, the group won third prize at the Osaka International Chamber Music Competition and Festa.

The musicians are the first Koreans to win at the competition.

Now in its sixth year, the Osaka competition is one of the most prestigious chamber music competitions in the world.

On July 25, the four young men will celebrate with a concert called “The First Novus Project.”

Novus has performed at a variety of venues, but the upcoming concert will be its first independent performance.

The musicians will play Quartett-Satz in C Minor, D. 703 by Schubert, Lyric Suite by Alban Berg and String Quartet No.13 in G Major Op.106 by Dvorak.

“The piece by Berg is not often played in Korea, but we chose it because that’s the piece we played at the Osaka International Chamber Music Competition,” Kim Jae-yeong said.