Pentaport rocks in the summer swelter

Pentaport rocks in the summer swelter 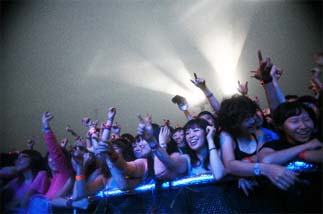 Incheon Pentaport Rock Festival takes places from July 25 to 27. Provided by the organizer

Koreans say you beat the heat with heat.

So with a sweltering summer upon us, rocking all night to piercing guitar riffs and thunderous drums is one way keep cool.

One rock venue where the heat will definitely be raging will be the Incheon Pentaport Rock Festival.

Now in its third year, the festival has an ambitious goal to become Korea’s Woodstock.

This year’s lineup looks like a British invasion. Travis, Underworld, The Music, Kasabian and Hard-Fi are scheduled to appear.

“Korean concerts and festivals are usually a step or two behind inviting the big names from world music,” explains Shirley Hong, a manger at Yellow 9, which is helping to organize the event.

“Our main focus this year was to bring in artists at the height of their career. It wasn’t easy, especially cost-wise because of currency exchange rates and oil prices. But we’re pretty confident of the lineup,” Hong said.

There will be 21 international acts from six countries. They include Gossip from the U.S., Ellegarden from Japan and End of Fashion from Australia.

Rock Cafe, a major online community of some 40,000 rock enthusiasts, plans to go to the festival en masse, an annual tradition since the first festival in 2006.

“We have high hopes for the Pentaport Festival this year,” said Lee Tae-cheol, who opened the online community in 2003. “Of course, we’re going there to enjoy ourselves, but we are also trying to show our support for rock festivals like Pentaport. We don’t want to see those festivals disappearing due to low participation. That is why rock communities like ours are all going.”

But rock lovers in Korea hope to see an enhanced line-up at Pentaport, Lee says.

“Most of our community want to see more original rock acts like those seen at Summer Sonic Festival in Japan,” Lee said. Lee and other members of Rock Cafe go to rock festivals in other countries, as well.

“But we understand that it’s not easy for the organizers, given that rock is still not mainstream in Korea and that the festival is only in its third year,” Lee said.

Incheon Pentaport Rock Festival is the largest rock event in Korea, but two other rock festivals will follow shortly.

The Summer Breeze Festival will debut from Aug. 7 to 8 with headliners like Prodigy, OneRepublic and Panic at the Disco.

“What sets Pentaport apart is our location,” Hong said. “Since our festival takes place away from the hustle of the city, people say it’s like going camping or on a summer vacation, enjoying modern music in beautiful nature.”

But the suburban venues also present a challenge. Some local vendors and hotels charge up to double their usual prices during the festival.

“Rock is all about being there at the moment, watching the live performance with others like us,” Lee said. “There are lingering biases in Korea about rockers or rock lovers, but successful management of these festivals can be a way to change people’s minds.”