Historic house at the heart of the nation

Historic house at the heart of the nation 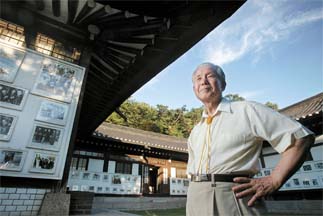 Every country has its own foundation story, whose spirit remains as a source of pride treasured by the people.
Korea has such a story that accompanies a significant date on the calendar August 15, 1948 the nation’s foundation day.

A new government was the victorious outcome of a long struggle for independence from Japanese colonial rule (1910-1945) and international trusteeship (1945-1948) following Japan’s defeat in the Second World War. The United States military controlled the southern half of the Korean Peninsula and Soviet authority administered the zone north of the 38th Parallel.

An important part of the foundation story is Syngman Rhee (1875-1965), Korea’s first elected president, who opposed the trusteeship, and Ewhajang, Rhee’s hanok, a traditional Korean house, at Ihwa-dong, Jongno, in central Seoul.

A view of Ewhajang, Syngman Rhee’s residence during the mid-1940s. By Jeong Chi-ho

Ewhajang is where Rhee and his Austrian wife Francesca Donner lived for a year after returning to Korea from Honolulu, Hawaii, in 1945. Rhee returned when he heard that Korea had been liberated from Japan. He had been campaigning for Korea’s independence abroad.

Upon his return, Rhee had no permanent home for a year. Hearing this, Kwon Young-il, a businessman, and some 30 other friends of Rhee, donated money and bought a house under Rhee’s name in 1947. 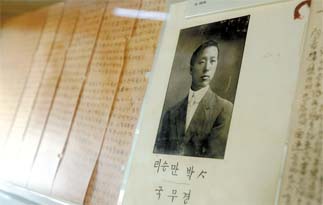 A selection of Rhee’s diplomatic letters.

Ewhajang, designated as Seoul Monument No. 6 in 1982, is now a presidential memorial hall and home to Rhee In-soo, Rhee’s adopted son, and his wife, Cho Hye-ja.

Entering the tile-roofed Ewhajang, visitors are greeted by a statue of Rhee, made in 1988 to celebrate the 40th anniversary of Korea’s foundation.

The sign in front of the statue reads, “Dr. Syngman Rhee ? The Father of the Republic of Korea.”

To the right of the statue is an L-shaped hanok called Jogakdang, the late president’s offices.

Korea’s first cabinet was formed here in July 1948, inaugurating a prime minister and 12 other ministers.

The forming of a cabinet led to the writing of a constitution, which was promulgated the same year.

Rhee In-soo, 76, who was adopted by the president in 1961, has preserved the wooden chairs and sofas once used at Jogakdang.

To the statue’s left is the U-shaped living quarters. Some 100 framed photos and documents hang along the outer wall. 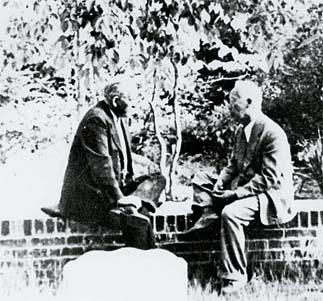 In the living quarters, visitors can see a display of some 20,000 items belonging to Rhee. Included in the collection are stubby pencils, chairs, suits and diplomatic documents that proclaimed Korea’s independence.

After he was elected president in 1948, the president moved from Ewhajang to Gyeongmudae, the present-day Blue House.

He went back to Ewhajang after he was forced to resign from office in 1960 following the April 19 Movement, a tumultuous student-led revolt against hotly contested elections.

There was a suspicion that Rhee, considered an autocrat by many, was involved in election fraud.

He served three consecutive terms and was elected to a fourth but was forced out. Rhee went to exile and died in Honolulu in 1965.

His body was brought back to Ewhajang and his remains were buried at the national cemetery.

Currently, the Cultural Heritage Administration is considering elevating the historic residence to national treasure status by early next year.

“The mansion is a significant historic site,” said Kim Soo-jung, an official at the Seoul City Culture Department.

“Although many important events happened there, the site was devalued for a long time,” Kim said.

At Ewhajang, Rhee promoted local movements seeking to establish an independent government. He was later elected as leader of the first National Assembly.

“Ewhajang is the heartland of the country’s foundation,” Rhee In-soo said. “But the country and people are ignorant. They shouldn’t treat their first president like this. Korean history should be viewed rationally rather than emotionally.”

Japan annexed Korea in 1910 and Rhee became the president of Korea’s first provisional government, which he helped set up in 1919 in Shanghai.

Korea was liberated from Japan in 1945, but it did not achieve automatic independence; the country was severed, with South and North both controlled by foreign powers.

“Rhee opposed any kind of trusteeship,” Rhee In-soo said. “The president strongly believed that a country should be established under the principle of self-determination of the people.”

The United States brought the Korean issue to the United Nations, which allowed a UN-sponsored election to take place. The North didn’t participate.

Some nationalists from the South, including Kim Gyu-sik and Kim Gu, objected to an election that did not include the North. They argued that self-government in the South would lead to further division.

Kim Gu in particular opposed the election. He often crossed north to persuade Kim Il Sung to unify. (Kim Gu was assassinated in 1949.)

“Rhee tried to continue the UN elections in the South and North,” Rhee In-soo said. “He always emphasized that at least one half should live.”

On May 10, 1948, the election took place. It was supervised by the United Nations Temporary Commission on Korea, and two thirds of the population living in the South voted.

Rhee argued that establishing self-government was the priority. Negotiations with the North came next. The fear among those in the South was that the southern half of the Korean Peninsula would be overrun by communist forces.

“Korea went through great turmoil for several decades,” Rhee In-soo said. “But people are not accurately remembering history. We should try to restore reputations. The country should reclaim its patriots.”

Rhee In-soo says his heart breaks because people don’t honor the principles and ideologies of the country’s foundation.

“Koreans hold a banquet on their 60th birthday. It’s a lucky number,” Rhee In-soo said, adding that it’s the country’s 60th anniversary but Koreans don’t seem to be celebrating.

He encourages people to look back at Ewhajang with more respect.

Seoul’s city government has announced it will restore six government-related historic sites, including Gyonggyojang, the residence of Kim Gu, and Ewhajang.

To get there, go to Hyehwa Station, line No. 4, exit 2. It is located near Korea National Open University.