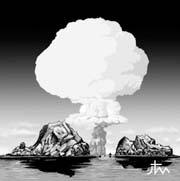 When describing the Korea-Japan relationship, the Japanese often use the phrase, “narrow stream of water,” referring to the way in which the close neighbors are only separated by a small body of water.

In the narrow East Sea (Sea of Japan), lie two large underwater craters. These two volcanic hot spots in relations between the two nations ? past history and the Dokdo Islets (known as Takeshima in Japan) ? mostly lie dormant, but when triggered, they erupt with explosive power.

In the Kim Dae-jung administration starting in 1998, relations between Korea and Japan were never better. Kim not only lifted the ban on Japanese popular culture but also pledged to establish a future-oriented relationship at the Joint Declaration of a New Korea-Japan Partnership signed with then-Prime Minister Keizo Obuchi. The ill feeling left from former Korean President Kim Young-sam’s comment, “The Japanese will be taught a lesson for their bad behavior,” soon melted away.

However the friendly mood didn’t last long. A Japanese history textbook that glossed over Japan’s invasion of Korea was approved by the Japanese government in April 2001. Just as cracks started appearing on the East Sea floor, Prime Minister Junichiro Koizumi inflamed the situation by paying a visit to Yasukuni Shrine.

The tension had lessened by the beginning of the Roh Moo-hyun administration. In July 2004, the shuttle summit meetings of shared friendship and frank conversations started. President Roh said, “During my term I will not bring up the issue of past history.”

Despite his remark, the two craters erupted again in 2005. Right after the Japanese ambassador to Korea remarked that “Takeshima is Japanese territory,” Shimane Prefecture declared Feb. 22 to be Takeshima Day. The conflict was amplified by the re-emergence of the textbook issue, and Koizumi again visiting the Yasukuni Shrine. Finally, President Roh declared diplomatic war.

Some liken the Korea-Japan relationship to the Sisyphus myth. The relationship continually takes one step forward only to take several steps back. It resembles the fate of Sisyphus, who was condemned to roll a huge rock up a steep hill only for it to roll back down once he reached the top, forcing him to start over.

Can President Lee Myung-bak escape this fate? The first test has come. Whether the Japanese government will print that Dokdo is Japanese territory in the textbooks will be decided today.

Worried eyes are turned to the East Sea to see whether the dormant volcanoes will erupt again.