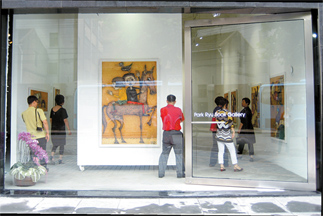 The Park Ryu Sook Gallery opened a branch in Shanghai on Saturday with an exhibition of works by Korean artist Yim Man-hyeok. By Park Soo-mee

For the opening of Park Ryu Sook Gallery in Shanghai on Saturday, Soo Choi deliberately chose a combination of international collaborators, including a Dutch interior designer, a Chinese partner and a Korean artist.

For Choi, the daughter of well-known Korean gallerist Park Ryu-sook and director of the Shanghai branch, it was a sign of diversity and strength that the rest of China misses.

For years, the Shanghai art scene has been dormant, overshadowed by the country’s art superpowers in Beijing and Guangzhou. Shanghai’s arty spirit played second fiddle to its glitzy urban facade, such as its elaborate heritage architecture and suburban shopping malls. 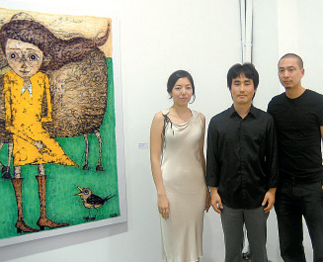 From left to right: Soo Choi, the gallery director, the artist Yim Man-hyeok and Zhao Yong Gang, the director of 1918 Art Space.

That’s all slowly changing. The local government and overseas collectors have begun to consider Shanghai as an up and coming market for contemporary Chinese art.

The city already has three major international art venues, including the Shanghai Biennale and Shanghai Art Fair, both of which take place in the fall.

Last year, the city’s first Korean gallery, Wellside, opened in M50 at 50 Moganshan Road, Shanghai’s biggest modern arts district. The area attracts an average of 400 visitors a day, according to a local source.

One explanation for the booming art scene in Shanghai is that there’s enough corporate sponsorship for art institutions here to free artists from financial burden. That’s a promising sign for Korean galleries looking into the Chinese art market but are mostly settled in Beijing and Hong Kong like Arario and Pyo Gallery.

“The city clearly has a vantage point as the Asian center of international business and trade,” says Choi, the gallery director. “The spectrum of collectors could also stretch to Singapore and Taiwan. In the last few years, the government has aggressively backed the industry, which also helps.”

The Park Ryu Sook Gallery, which has branches in Seoul and Jeju, will be run in collaboration with a local Chinese art gallery called 1918 Art Space, which is located on Chanping Road, Jing An District.

“I think the idea of psychological realism in Chinese art will definitely play a role in positioning my work here,” says Yim. “But I think Chinese art is too focused on popular ideals of political pop art at the moment, which I am not too fond of.”

Collectors and industry insiders share mixed views about the growing modern art scene here, including the opening of a new Korean gallery.

“Already you see many artists and collectors turning to Shanghai as the next cradle of contemporary Chinese art,” says Sunhee Kim, the art director of Bund 18 Creative Center, a non-profit alternative space run by a Taiwanese investment company. “Many critics are disappointed about the commercial output of the Beijing art scene.”

Zhao Yong Gang, the director of 1918 Art Space, agrees. “Beijing definitely has bigger names and more artists than anywhere else in China. But their style is very politicized and uniform, as that’s what most Western collectors look for in contemporary Chinese art. Here, you expect the art scene to be more commercial, because the city is commercial, but in reality the artists in Shanghai are more independent.”

On the whole, the city’s collectors and art lovers who are hungry for diversity welcome non-Chinese art.

“At the moment, Chinese art is booming and there is little awareness about Korean art,” says Manfred Schneeweis, a German businessman in Shanghai who collects Asian art. “But I think Korean art carries more depth technically and conceptually. Hopefully it will become more prominent in China in the future.”