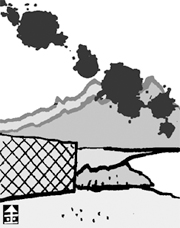 The Berlin Wall divided Germany into East and West, however, there was no physical wall dividing the canal areas. Countless numbers of East Germans were shot to death by their own border guards when they tried to flee the East. There were also a few incidents where West Berliners accidently “fell” into the canal while walking along the canal banks, targets of East German snipers.

The embarrassed West Germans were drawn into negotiating with the East and reached an agreement that a person’s identity must be confirmed before any shot is fired. This was guaranteed in exchange for cash donations to the East. However, civilian death tolls did not drop despite the complicated identity confirmation procedures.

“No matter how much you like adventure, do not go to these places,” advised Forbes magazine. Somalia, Iraq and Afghanistan were among the countries on the magazine’s list of the world’s most dangerous travel destinations. These places are still in conflict and notorious for drug and weapons smuggling. They also have insurgents who are known to kidnap civilians. Korean sailors, the late Kim Sun-il and 23 Christian volunteers all came to such peril.

However, Foreign Policy magazine from the United States presented a different list of tourist destinations it deemed best to avoid. The first was Mount Kumgang, in North Korea. The magazine mentioned that “Americans can acquire visas for North Korea, but a nonexistent U.S. Embassy isn’t going to be of much help if you get into trouble with the Stalinist regime’s notorious secret police.” It seems that the world-renowned diplomatic magazine was right on the money.

A tragic accident has occurred in Mount Kumgang in North Korea. An unarmed 53-year-old female civilian was shot to death by a North Korean soldier.

A military guard is required to fire a warning shot first. When he fires off live bullets, he should aim at legs or arms, so as not to take out life. The woman was said to have been shot through her chest and thigh with only two bullets. The shooter must have been a skilled marksman.

Now, the North is suspected of concocting an elaborate defense of the accident. Pyongyang is blocking Seoul investigators from entering the North, insisting, “The South is wholly responsible for the accident.”

It is only a matter of time until Mount Kumgang becomes one of the most dangerous destinations in the world.

It seems likely that Seoul will have to kneel down and beg not to be shot in exchange for money.