Reality bites into fortunes of the middle-class

Reality bites into fortunes of the middle-class 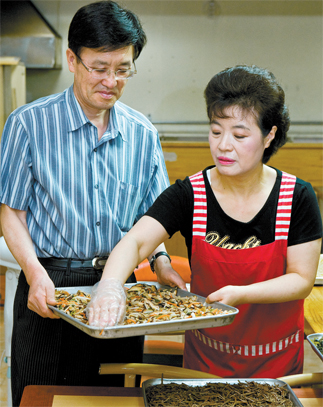 A global credit crunch, surging oil prices and inflation have squeezed the Korean middle class into a tight corner.

The story of Kim Byung-cheol, a former branch head of Donghwa Bank, typifies the stark reality that households are facing today.

“My wife’s swollen hands reflect the cold truth I am facing,” said Kim, who lost his job after Donghwa collapsed following the Asian financial crisis in 1997.

“Before that, my family of five was cramped into a three-bedroom apartment. When we moved, it was like entering a palace. I can still picture the moment I entered the house for the first time,” Kim recalls.

The property purchase represented the pinnacle of Kim’s professional career.

Little did he know that his life would shortly tumble out of control.

A year after the financial crisis, the government sought to consolidate the banking sector in order to strengthen the economic fundamentals of the country.

Donghwa Bank was taken over by the bigger Shinhan Bank. Out of 2,000 employees, only 200 kept their jobs. As a senior official, Kim was not included.

When he was shown the door, Kim’s redundancy pay was 43 million won ($42,828). After paying his outstanding debts, he was left with 3 million won.

At the time, his eldest son was a high school freshman. His youngest child was in the third year of middle school. The need to cover skyrocketing education fees was top priority. 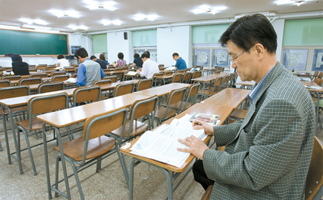 .Kim Byung-cheol is preparing for an exam as a real estate agent to get his life back on track. By Shin In-seop

“One day I had a chauffeur driving me to my large apartment. The next day, I had no job. Panic kicked in,” says Kim.

For the next six months, Kim’s best friend was the bottle as he tried to cope with his new life.

He later tried to run a private library, which he financed with 130 million won that he scraped together. But his monthly income amounted to just 2 million won per month.

A year and a half later, a relative who had succeeded in developing parts for waste treatment equipment asked Kim to head an affiliate company in charge of selling the parts.

It seemed a perfect opportunity to revive his career. But the venture failed in November 2001, leaving Kim in even more desperate straits. To repay his debts and cover his sons’ education expenses, Kim sold his apartment and moved to a smaller one.

His wife Lee Shin-hui, a high school teacher before their first child was born, then opened a noodle restaurant near their house to help make ends meet.

But there was worse to come. At the end of last year, Kim was diagnosed with cancer. Surgeons cut out half his liver, and even though the cancer had not metastasized, Kim lost 20 kilograms (44 pounds). 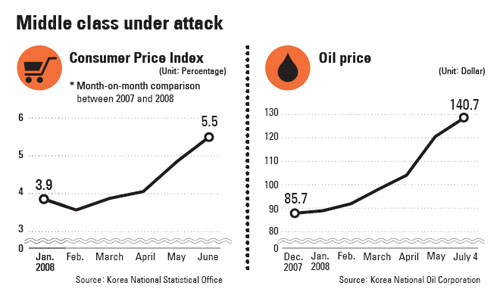 Meanwhile, the noodle shop is under pressure. The constant hikes in commodity prices are nibbling away at the Kims’ only income source.

Theirs is not the only small business suffering. Out of ten restaurants that were operating at the same complex, only two are still in operation.

The building’s owner is cutting the Kims some slack. He asked them to cover just his utility fees, about 500,000 won a month.

The owner is waiving the monthly rent of 400,000 won. He’s worried that the arcade will become a ghost town if all the businesses there fold.

The bad luck and economic crunch had left Kim with little choice. After losing his 161.7-square-meter apartment, which had symbolized his family’s fortunes, he had to move them again, to a rented 105-square-meter flat, on a deposit of 180 million won.

After a lifetime of hard work to pay for their earlier four-bedroom apartment, Kim had to borrow 50 million from relatives to put money down on their present apartment.

Kim’s annual salary was 80 million won when he was a bank branch head; now his family relies solely on his wife’s monthly income of 1.6 million won.

To make that money, she has to work from morning to evening with few breaks.

The life that Kim’s family is leading exemplifies how downturns in the economic climate have hit middle-class families in the country.

President Lee Myung-bak promised the country 7 percent growth but he has trimmed back his predictions to just 3 percent.

For Kim, the only way out of his misery is to launch another career, which is not easy when you are already 60.

He has pinned his hopes on gaining the qualifications to become a real estate agent. The exams are in October. Once he gets his license, he plans to leave for the province where house prices are much cheaper.

This is perhaps his only escape route.

Despite the financial difficulties, Kim is thankful that his two sons have grown into responsible adults.

Kim Seong-ryong, 26, graduated from medical school and is currently working at a public health center. A full scholarship put him through six years of medical school.

Kim Seok-hun, 24, the younger brother, is majoring in graphic design and has already established a venture company.

Today, observers say that Kim’s family is not the only one whose middle class status is under threat.

Kim Mun-jo, a sociologist at Korea University, said the Korean middle class used to make up close to 70 percent of the country. That figure has shrunk to 40 percent.

Kim says many Koreans have given up hope of climbing the social ladder. “Before the financial crisis, people hoped they could enter the upper classes by studying hard. There was a positive attitude prevailing in society,” said the professor.

“But people have given up the belief that if they work hard, they can buy an apartment in Gangnam [southern Seoul] by the time they are in their 40s,” he says. He estimates that only about 20 percent of people in Korea these days are future-oriented and have a positive attitude.

The economic forecast for the latter part of this year also looks far from rosy.

The Bank of Korea recently announced that the country’s growth rate would be around 3.9 percent while inflation would rise from 4.3 percent to 5.2 percent.

This forecast leaves Kim without illusions about the future.

At the end of last month, his former colleagues at Donghwa Bank had a reunion. “I heard there was a meeting but I didn’t go. I just don’t have any emotion or money left to spend,” said Kim.