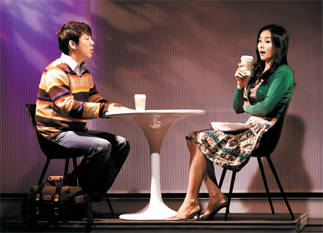 Kim Joon-hyeok strikes up conversation with Lee Se-yeon in a cafe scene during the musical “Polaroid.” Provided by PMC Production

Unlike film or digital cameras, Polaroids produce a single photograph that can’t be reprinted.

No matter what you do, images and color taken on Polaroid film slowly fade with the passing of time.

This is the basis for PMC Production’s original musical, “Polaroid,” a show about love, jealousy and friendship among young people as captured through the eyes of a lens.

The story revolves around Kim Joon-hyeok, a college senior who goes out on the street with his camera and takes pictures of random people for his graduation exhibition.

In the process, Kim captures images of art student Lee Se-yeon. After Kim’s exhibition, their relationship develops and they become lovers.

During this time, college freshman Jang Seon-young starts to have feelings for Kim. During his project, Jang thought Kim was taking pictures of her. But his camera was actually focused on Lee.

Jang eventually learns that Kim and Lee are dating, but she has trouble letting go. She waits year-after-year hoping that the couple’s relationship will fade away like a Polaroid shot.

In the meantime, to learn more about Kim, Jang starts following him and taking her own Polaroid photographs, but also makes a new friend who offers a sympathetic shoulder to cry on.

Andy from popular Korean boy band Shinhwa appears in the musical as Kang Jeong-ho, a college freshman majoring in theater and film. Kang has a crush on Jang, who attends the same acting class.

Unfortunately all Kang can do is wait, hoping that Jang will forget about Kim.

This is the second musical for the boy band member who made his musical debut in “Music in My Heart” in August last year.

Another celebrity starring in this musical is Lee Ha-nui, also known as Honey Lee.

Lee was a Miss Universe contender last year and will be playing the role of Lee Se-yeon.