People often think that going to a classical concert is an expensive pastime in Korea.

This is understandable when you consider that ticket prices for classical performances usually start from 30,000 won ($30) while tickets to a movie theater cost a third less. But today there are more opportunities than ever to sample live classical music at more affordable prices.

One tip is to visit venues outside Seoul. Classical music fans are discovering that tickets to a concert in Incheon cost half what you would pay for the same performance in the capital.

Tickets for the Asia Philharmonic Orchestra concert led by Chung Myung-whun on July 30 at the Seoul Arts Center will cost between 30,000 won to 100,000 won. But a day earlier at the Incheon Multiculture and Arts Center, tickets for the same performance will range from 30,000 won and 50,000 won. 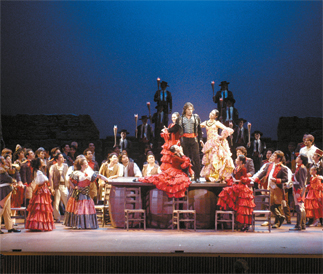 Thanks to lower production costs, tickets for the National Opera of Korea’s performance of “Carmen,” which starts next week, are cheaper than usual. Provided by the organizer

The APO is an associated orchestra founded by Chung with prominent musicians from Korea, Japan, China, Malaysia and Singapore. The orchestra will be performing the same repertoire on both days. The performers will be the same. So will be their performance fees.

How is this possible? The Incheon provincial government runs a cultural support program, “Incheon & Art” that funds concerts. The program began in 2005 by financing three performances. This year, the program has reduced ticket prices for 12 concerts.

As news spread, it’s hardly a surprise that the Incheon concert has seen double the number of ticket sales than the Seoul performance, according to CMI, the organizer of the APO concert. Some classical fans are willing to travel to Incheon for cheaper tickets, said the organizer.

Another bargain will be the performance of “Carmen” by the National Opera of Korea, which runs from next Wednesday through Aug. 1 at the Seoul Arts Center.

Carmen is cheaper because the opera company is using a small set, a relatively small venue for just 500 people at the Towol Theater and electronic instruments instead of an orchestra. The organizers said they hope the setting will induce a more intimate interaction between the performers and the audience.

You can also get tickets for 5,000 won to 10,000 won next Monday at the Seoul Arts Center to see the Seoul Philharmonic Orchestra. Tickets usually cost up to 100,000, but prices were lowered to mark the start of the summer break and the orchestra didn’t invite any guest players for the program of Rossini’s “William Tell Overture” and Beethoven’s Symphony No.5 in C minor. Also check out concerts by chamber ensembles or soloists instead of entire orchestras, and hunt for smaller concert halls instead of major venues.